The Broncos beat the Giants 41-23 in Week Two NFL action.

When it comes to Manning Bowls, Peyton is still the king. 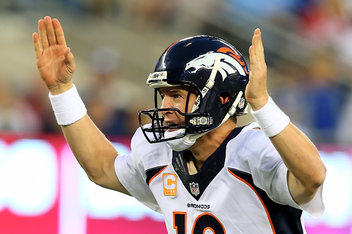 Elder brother Peyton Manning again showed younger brother Eli Manning how it was done, throwing two touchdowns and no interceptions while Eli threw just one touchdown to four interceptions as the Broncos went on to win 41-23 in Week Two NFL action.

Trindon Holliday took a Giants punt in the 4th quarter back to the house with an incredible return, making six or seven Giants miss, that put the Broncos up 38 to 16 and the game out of reach.

Duke Ihenacho was injured in the win, hurting his ankle in the fourth quarter and being ruled out the remainder of the game. It wasn't clear how serious his injury was. Robert Ayers and Ryan Clady also walked off the field with injuries; Clady's looked to be an ankle.

This game cannot end fast enough for the #Broncos. Ihenacho, Ayers, Clady all hurt in the 4th quarter.

Overall it was the Broncos defense that kept the Giant at bay. They overcame some really terrible officiating, and a handful of Giants big plays, with a consistently stout effort. Dominique Rodgers-Cromartie, Rahim Moore, Chris Harris Jr., and Tony Carter all came away with interceptions that helped the Broncos pull away.