The Broncos pretty much dominated throughout this entire game; here are my instant reactions!

Well, the Broncos pretty much dominated from start to finish. There was nothing about this game that made me think "man, we might be in trouble." Are there a few things we need to work on? Sure, but as the game progressed, you could really see the glaring weaknesses from the previous week start to get ironed out.

Montee Ball...... Why my man, why? Why do you constantly make me eat crow? It's ok, I still got your back. I'm not jumping off the Montee Ball train to the heavens! You fumbled on what would have been a go ahead TD standing up, but you know what? I'm ok with that (for now). This is only your 3rd fumble since high school. You average 1 fumble every 2 years. Here's looking to you being sure handed until maybe your next hiccup in 2015. While you can't make up for fumbles, you did buckle up your chinstrap and go out there and convert on a 3rd & 14 the very next drive. You also blocked well. I'm gonna give you a semi-pass for this game, but I'm running out of passes pretty quickly. You gotta start showing us something! 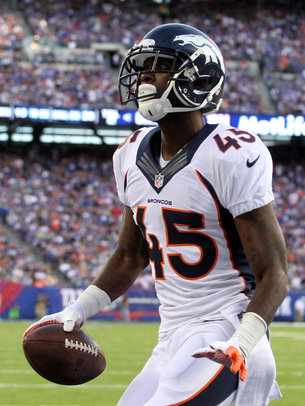 Speaking of Montee Ball though, I'm telling you, he had ZERO rushing lanes all night. It almost seemed like the Giants knew that each time he was in the game, he was getting the ball up the middle and would cheat people into the box. But hey, that's enough excuses out of me because.....

How about Knowshon Moreno? My goodness, he's picking up right where he left off last year. He is by far the Broncos best running back... by far! Know however, we need to start the Knowshon Clock... tick tock, tick tock, times running out on how long he lasts. It sucks that right when the game starts clicking inside Moreno's head, he gets season ending injuries. This guy just can't catch a break (in the good way). So I'm gonna try to enjoy Moreno while I can, cause we all know that his days this season are numbered.

How unbelievable is Duke Ihenacho? This dude flat out flies! Here's to hoping that he has a speedy recovery. Our defense is definitely missing Von Miller and Champ Bailey, but Duke is really helping us miss them a whole lot less. But the biggest thing is that I'm really glad we have Adams on our team still. We have without a doubt the best backup safety in the league today.

The Rahim Moore Vengeance Tour continues! His amazing coverage, fantastic run support, and ball hawking abilities are finally shining through. Coming out of college, he was known as a ball hawk, but he has been anything but with the Broncos. This year he took his game up yet another notch. He is truly turning into a great (borderline elite) safety right before our eyes! Our safety tandem is one of the best in the league.

The offense sputtered early, and then turned it on later. What is with our Jekyll & Hyde offense? They can't get out of their own way, and then BAM, 40 points! Will they ever be able to figure it out for a full 60 minutes?

What is with our Jekyll & Hyde offense? They can't get out of their own way, and then BAM, 40 points! Will they ever be able to figure it out for a full 60 minutes?

Hey Welker, yeah you, quit dropping passes! Same for you Demaryius "Alligator Arms" Thomas! Catch a ball or two even when you know you're gonna take a shot. And Decker, don't stand there laughing at them, you're not in the clear either! You had a good game, but not a great game! And guess what? You won't get blatant pass interference calls if the refs think you'll drop it anyways! I know that Manning wanted you to feel involved so he force fed you the ball, but c'mon man, you gotta make an actual impact!

Also, a big shout out to my boy Robert Ayers! My man, you may not have had a sack, but your presence was definitely felt. You wrecked havoc out there and came within a manicure of recording 2 sacks in 2 games. You're definitely stepping your game up, and I feel perfectly comfortable with you in the starting lineup. The same can be said for the entire defense. You guys are really stepping up your game and becoming just as exciting to watch as the offense, and that is no easy job. You guys picked off Eli 4 times and that TD that the Giants got..... well, lets just say that the refs tried to give you the touchdown instead of making you earn it. Don't take that score hard. They should have never been that close to the goalline to begin with.

This was an overall great game even if it wasn't eventful, but I guess that's what comes with having Peyton Manning as your quarterback.

One final note: Hurry up with your recoveries Clady, Ihenacho, and Ayers. All three of you are vital cogs to our team. Speedy recoveries to everyone.