Lest we get too far ahead of ourselves, we must clarify that we are only two weeks into the 2013 NFL season. A lot can happen between now and the end of the season.

And a lot of records will be broken. 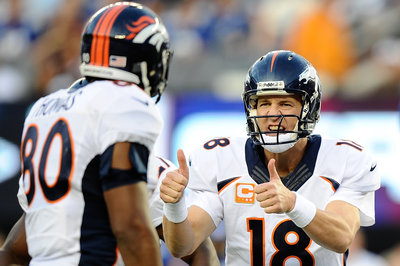 The Denver Broncos are on pace to break the NFL's scoring single season record and have a shot at breaking the regular season record of 23 consecutive games.

On Sunday, Denver Broncos quarterback Peyton Manning went 30-of-43 for 307 yards and two touchdowns in a 41-23 win over the New York Giants and his younger brother, Eli Manning. Manning's performance gave him nine touchdowns on the year following his seven-touchdown showing in Week 1, which earned him FedEx Air Player of the Week honors.

According to the team, Manning is now the first player in NFL history that has thrown for nine touchdowns and no interceptions through the first two games of a season. Manning also continued his fifteen-game streak of having a passer rating of 90.0 or better.

On the year, Manning has now thrown for 769 yards. Manning is on pace to throw for 6,152 yards and 72 touchdowns this season.

We obviously do not expect Manning to actually throw for more than 70 touchdowns this season, but with a multitude of receiving options on offense and Knowshon Moreno emerging as a runner, Denver's offense will be hard to stop in 2013. As a result, we will be seeing records broken by Manning and the Broncos this year.