When the Denver Broncos win, the MHR staff gives out game balls! And win the Broncos did, to the tune of 41-23 drubbing of the New York Giants. Take it away fellas...

Although he didn't get to meet the 100-yard milestone, Knowshon Moreno was undeniable in his pursuit of the end zone. Cap that off with his drive sustaining fumble recovery off of the Demaryius Thomas catch/fumble, which Moreno then turned into a 20-yard touchdown. The Denver Broncos showed that they do have a running game albeit meager, but have found it much easier to advance the ball on the ground with a two tight end set, than a three receiver set. Moreno's trade market will never be hotter than it is this Monday morning. However, he currently looks like the only running back on the Broncos who is worth his weight. - Ian Henson

Knowshon Moreno. Had 107 total yards from scrimmage, two touchdowns and showed why he deserved that starting job, running successfully behind a line that didn't open a lot of holes, as Montee Ball discovered. Oh and 7.2 yards per carry doesn't hurt either! - Topher Doll

A big bounce back week for Eric Decker! Lead the Broncos in targets(13) and catches. Decker finished the night with 9 catches for 87 yards. With a relatively quiet night from both Wes Welker and DT, It was huge for Decker to step up. Just shows that this offense is stacked with weapons, and each week one of them is bound for a big game. Fun time to watch this Broncos offense! - Scott Payne 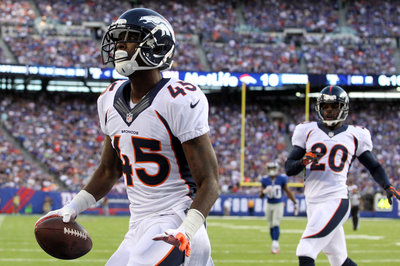 With Champ Bailey sidelined for the second consecutive week, somebody had to step up at cornerback. Denver's secondary responded, with Tony Carter stepping up. Teaming up with Chris Harris Jr. and Dominique Rodgers-Cromartie at the cornerback position, Carter held his own in one-on-one coverage, tipping a pass that Harris intercepted and later recording his own interception. Carter did allow a few big catch and runs here and there, but this secondary has adopted a bend but don't break mentality, a description that fits Carter well. The future is bright for Denver's young group of defensive backs. - Jon Heath

Chris Harris gets my game ball. He had maybe the toughest task of the evening... He had to shut down Victor Cruz. He did about as good a job as humanly possible tonight. Oh, and that was NOT Pass Interference! I'm saying it right now, Chris Harris is a Top 5 Cornerback in the NFL. You couldn't name me 5 corners where there wouldn't be an argument about Harris deserving to be in there. - Pete Baron

Welcome to MVP Airlines, your pilot today will be Sir Peyton Manning. The guy has scored 9 touchdowns in two games. Add that to the fact that the Broncos have scored 90 points in their first two games as well. A lot of offensive records are going to fall this season and Peyton Manning is going to lead the way. - David East

I'll go with Broncos front four. While they didn't register a sack (Trev had the only one of the night) they held the Giants run game to 1.2 yards per carry and Eli was never comfortable in the pocket and it showed, missing a number of open receivers. He was put on his butt at least 5 times and was harassed all night. So while those who only look at sacks may say Ayers, Wolfe, Jackson, Knighton, Unrein and Vickerson had a bad game, I'll bet Eli and the running backs would beg to differ. - Topher Doll

Julius Thomas was held in check nearly the entire game, but when the Denver Broncos needed a score in a close game he found his opportunity to shine and would not be denied. The game that was within reach early in the fourth quarter was put away for good with that touchdown score.

I'd also like to shout to Trindon Holliday because his punt return for a touchdown that sealed the deal was a thing of beauty. Pretty much the best mid-season pickup in NFL history right there. - Tim Lynch

Your game balls in the poll and comments.