Share All sharing options for: Broncos at Giants In Focus: Denver's top performers

No one stat or grading metric can tell the full tale of how well the Denver Broncos will be this season, but I'm a fan of collecting different stats and watching game film to help me paint a picture. Thus, I look at the advanced stats from ProFootballFocus to see who graded best in the Denver Broncos' 41-23 victory over the New York Giants. 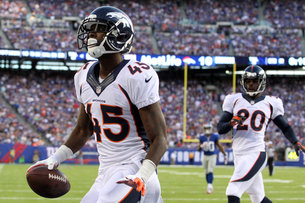 Knowshon Moreno started for the second straight week, and he was dynamic. A two-touchdown, 93-yard night was only elevated by the fact that he only touched the ball 16 times. Moreno took home PFF's Game Ball honors for the week.

No interceptions through two weeks of the season. Even if Manning doesn't end up breaking NFL records, taking care of the football will give the Broncos a great chance to win week in and week out.

Ryan Clady was night and day from a week ago, where he was one of Denver's lowest-graded players. Clearly he got better as his shoulder injury continued to come along, grading with a dominant 2.5 in pass protection Sunday. The Broncos will miss Clady for whatever period of time he'll miss with his Lisfranc foot sprain.

Rahim Moore played in an incredible 77 snaps - and he played well in all but one of them (his first one - Eli Manning's big completion to Victor Cruz, where Moore bit on the tight end's route). His grade would have been even higher had penalties not come into play, but the officiating was officially suspect all night. His personal foul for a perfectly legal hit late in the game was especially outrageous.

Malik Jackson only played 32 snaps, but he registered two QB hits and two QB hurries in that limited sample size (registering a pressure in 12.5% of his snaps).

Tony Carter hauled in one interception Sunday, but also caused another one - with his foot. Fluke game-changing plays notwithstanding, Carter made a difference legitimately against the Giants, netting two passes defensed and three other tackles.