Share All sharing options for: Denver Broncos Power Rankings Around the Web: Week 3

Denver is weathering injuries and suspensions rather nicely. All they've done so far is beat the defending champions and stroll through an extended preseason bout with the Giants, that just happened to be the most hyped game of the season so far. That's the thing about hype. Sometimes, it's way off the mark, e.g. Manning Bowl III. But occasionally, it's justified, e.g. the 2013 Broncos. In four more weeks, they'll have Von Miller back too.

Is there another team in the NFL as dominant as the Denver Broncos so far in 2013? Let's see, 45 PPG and that was against two of the last three Super Bowl champions. The only other time this franchise has had a team that I would consider to be dominant was the 97-98 Broncos. It's only two games in, but so far its looking good for Peyton Manning and John Elway.

Denver's plus-40 point differential is tops in the league after convincing wins against the Ravens and Giants. The way the Broncos have played, hosting the Raiders Monday night doesn't seem scary.

They have earned this spot after their impressive performance against the Giants. Von Miller has not been missed as much as we thought.

2013 Broncos Power Rankings: Around the Web 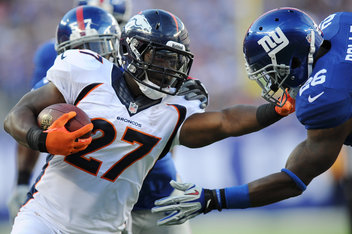 Ranked No. 1 last week they hold the top spot with a road win over the Giants. The Broncos have scored 90 points in two games and probably left another 10 on the field. They will get better on defenses when Von Miller and Champ Bailey return. Too bad the Broncos don't play the Seahawks this season.

(8 first place votes). The AP Pro32 is determined by a simple points system based on how each voter ranks the NFL's 32 teams. A team receives 32 points for each first place vote, 31 for second place and so on through to the 32nd team, which receives one point.

Simply put ... Peyton Manning is going to have his best season since 2004, when he threw for 49 touchdowns. Maybe better.

Say what you want about the guy, but Knowshon Moreno has given this football team a lift since getting involved in the offense late last November, having rushed for 631 yards over his past eight regular-season games. The 93 yards he gained against the New York Giants provided an already formidable attack with that prehistoric rarity in pro football: balance. Oh, by the way, Peyton Manning and Eli Manning are brothers.

Many are declaring the Broncos to be the top team in the NFL. I can totally see that argument, but I'm not sure I like Peyton Manning's chances against the ridiculous Seattle and San Francisco defenses. Manning has posted awesome numbers thus far, but as many NFL analysts have noted, his arm doesn't look the same. We all saw what happened when he was matched up against an elite stop unit like Baltimore's in the playoffs this past January. Having said that, I wouldn't criticize anyone for having the Broncos No. 1 in their power rankings.

Where do you have the Broncos ranked?