*Pitta will be placed in IR/Designated to return list on Sept. 4th. He had to make the final 53-man roster in order to be eligible. 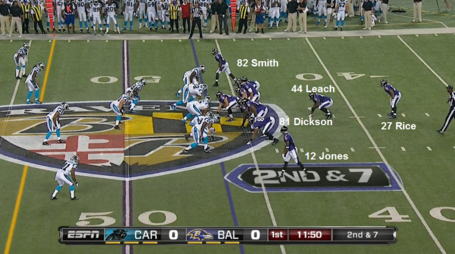 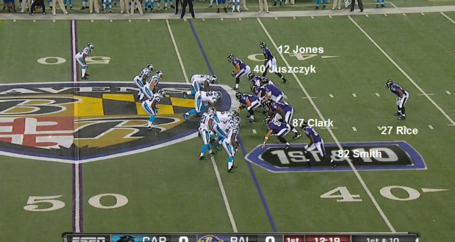 This slight adjustment substitutes FB Juszczyk for FB Leach and Dallas Clark for Dennis Pitta. First of all notice how Juszczyk is lined up as a receiver. He may be listed as a FB, but the Ravens will move him around and use him more as an H-back type player. With this new group of players, they have 5 legitimate receiving threats out of heavy personnel. 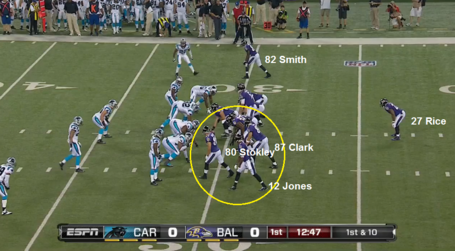 This grouping isn't necessarily a 3rd down only grouping, though against the Broncos, I would expect them to use this personnel mainly on 3rd downs. If they were to come out of the gates in 11 personnel, the Broncos would likely counter with their nickel defense which I see as a mismatch in the Broncos favor. Clark isn't much of a blocker, and though Stokley is better in that regards, the Ravens aren't going to be able to run consistently or effectively with this personnel. The Broncos strength at the moment is our secondary. 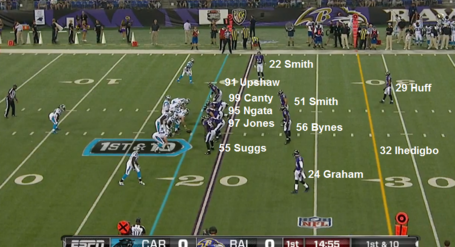 This is their run stuffing defense. You will NEVER see Elvis Dumervil in the game in this defense. Upshaw is the key here, he is the defender that the Ravens rely on in the running game to set the edge. He does an excellent job and is difficult to block. Corey Graham and Jimmy Smith project to be the starters in this base defense at cornerback. In nickel situations, Lardarius Webb comes into the game on the outside and Graham kicks back to cover the slot receiver. 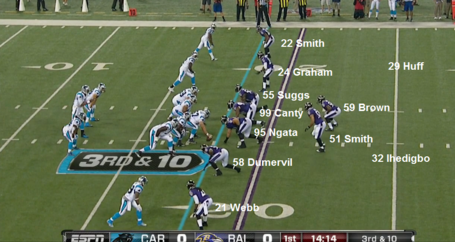 This is exactly Broncos like to do in nickel situations on defense. Suggs and Dumervil will be your hand in the dirt rush DE's. Ngata slides over to be the 0/1 tech and Chris Canty becomes a 3-tech. This is a fluid situation. You will see Suggs and Dumervil moved around to both sides. You will also see them stacked from time to time rushing from the same side. Same thing with the DT's. You may see Ngata as a 3-tech.

With the linebackers, starting Mike Daryl Smith stays in the game in a role similar to what Wesley Woodyard will do in nickel situations, and rookie LB Arthur Brown comes in to play the role of Danny Trevathan in coverage.

I was not able to find an instance of when they used this defense in the preseason, but this should be simple to recognize. The 3rd safety would be rookie Matt Elam. I suspect that if the Ravens run "Big Nickel" Elam would also be the 3rd safety in coverage.