The Denver Broncos put the finishing touches to their practice squad on Monday, bringing in a new face with a familiar name.

Brandon Marshall is coming to Denver.

But he's not returning to Denver, it's not that Brandon Marshall.  A second-year linebacker out of Nevada, Marshall signed with the Denver Broncos' practice squad on Monday morning. 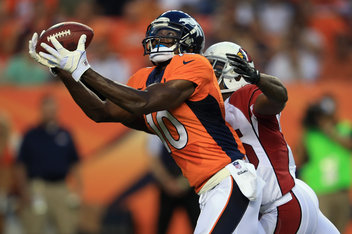 The news was first reported by ESPN's Adam Schefter on Twitter.  The team's 2013 practice squad is now complete with eight members.

Drafted in the fifth round of last year's draft by the Jacksonville Jaguars, Marshall recorded two tackles while dressing for five games as a rookie in 2012.  The Broncos confirmed the signing Monday morning.

Marshall is the second linebacker to sign with the team in the past twenty-four hours, coming a day after the team claimed former Philadelphia Eagles outside linebacker Adrian Robinson off waivers on Sunday.

Review all of the signings and cuts the Broncos have made over the past 48 hours in our story stream here.