Broncos going with the "no fullback" option

For the first time in at least seven years, the Denver Broncos are entering a season without a fullback listed on the roster.

Share All sharing options for: Broncos going with the "no fullback" option

For the first time since at least 2006, the Denver Broncos are entering a season without a fullback on the roster.

Last season, it was Jacob Hester. From 2008-2011, it was Spencer Larsen. In 2007, it was Paul Smith. The Broncos released Hester on Sunday, a day after rookie running back C.J. Anderson made the final roster. 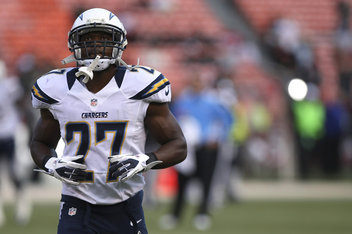 The Broncos have a host of running backs to choose from, but there's no fullback listed on either the active roster or practice squad.

So where do the Broncos go from here?

First and foremost, the fullback position is a dying breed in the NFL. Team's don't run like they used to, and the Broncos rarely used a fullback last season.

In 2010, the Indianapolis Colts listed "fullback/h-back" on their depth chart, a position where current Broncos tight end Jacob Tamme was listed. The Broncos view Tamme more as a receiving tight end these days, but they have other players that could fill a similar role.

There's Virgil Green (a solid blocker) and Julius Thomas (a monster of a man) at tight end and rookie C.J. Anderson, who spent time at fullback during training camp, according to MHR's Kyle Montgomery. Defensive tackle Mitch Unrein is also an option.

Last season, Unrein played fullback in goal line formations for the Broncos several times throughout the season. Unrein is remembered for catching a touchdown pass in Week 13 against the Tampa Bay Buccaneers, but he was also effective as a blocker in short-yardage situations.

Quarterback Peyton Manning does not often utilize a fullback in Adam Gase's offense, but when they will want to use an extra blocker this season, they'll have options—from Green to Thomas to Anderson to Unrein or someone else—there are players that can handle fullback duties.

But there's no official fullback listed on the depth chart, which is a sign that the position is fading out of the game at the pro level. Welcome to the passing era of the NFL.