Rivalries will be renewed as the Denver Broncos (2-0) face the Oakland Raiders (1-1), with fresh new faces in Oakland that will strike a familiar resemblance to their opponents on the other side of the field. In addition to this being former Broncos defensive coordinator Dennis Allen's second year as head coach of the Raiders, they added ex-Broncos Jason Hunter and Tracy Porter this offseason. Both are productive starters on the Raiders defense.

The Broncos have outscored each of their first two opponents by double-digits in 2013, so it will be interesting to see if the Terrelle Pryor-led running attack can keep the game interesting. Rivalry games usually are. 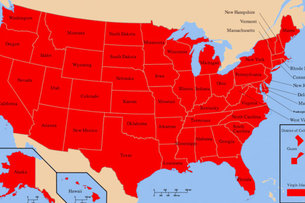 If you're in the red, you will get the Broncos game (click for more). 'Murrica.

Monday Night Football! ESPN will broadcast the game nationally, brought to you by the always-excellent Mike Tirico and the sometimes-terrible Jon Gruden.

The Denver Broncos opened as 15.5-point favorites to win and have stayed around that level throughout the week.