Broncos vs. Radiers: Five Questions with the Mortal Enemy

Questions answered by the Oakland Raiders writers over at Silver and Black Pride.

Share All sharing options for: Broncos vs. Radiers: Five Questions with the Mortal Enemy

Terrelle Pryor has really busted onto the scene, what are his expectations for this season? 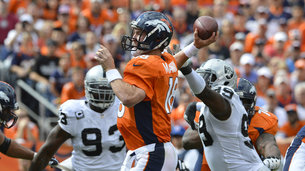 What scares you the most about this Raiders team?

Scares me? I'm not really sure how to answer that question. I guess the draft picks thus far. The 2012 draft has proven to be a disaster without a single starter and only one current active player on the team - round six pick Christo Bilukidi. This year's draft hasn't shown much promise either. D.J. Hayden has shown promise as he should for being a 12 overall pick, round two pick Menelik Watson can't stay healthy, round three pick Sio Moore has a fantastic attitude and has shown flashes, Tyler Wilson was cut, and after that only round 7 receiver Brice Butler has shown any promise. A rebuilding team absolutely needs their draft picks to produce and be the foundation for the future. Thus far the drafts of this new regime haven't yielded much to be excited about and that's concerning.

What is the biggest surprise you've seen of this Raiders team so far?

The play of the defense. They have just two returning starters and are playing some of the best football I've seen in a long while. They are hungry and well coached with a nice mixture of young and unheralded players and veteran leaders. In that vein, Charles Woodson has been phenomenal. What an impact he has made. I expected he would be a tremendous addition but I'm not sure I saw his impact being the glue the way it is both on and off the field. The players can't say enough about his influence and he doesn't look like he has slowed down one bit. He is the ageless wonder.

Seriously, what is Matt Flynn going to do?

Flynn is going to work to hope at some point this season he is given his shot to prove his worth. He lost the quarterback job because he was ineffective. Then he had tendinitis in his elbow just as he did last season which could tell you he is just not built to be a full time starting quarterback in this league. It's hard to know for sure. Refer to my previous statement about Terrelle Pryor as his only shot to ever have another shot at being a starting quarterback again.

If you could take any Bronco (outside of Manning, obviously) and put him on the Raiders for this game, who would it be?

Big thanks again to Silver and Black Pride for taking the time to answer these questions!