Did Eric Decker and Ronnie Hillman get back in MHR's good graces?

Well, well, well. Maybe it isn't going to be Knowshon Moreno's backfield after all this season. Hillman rushed nine times for 66 yards (a team-high) and a score on Monday, showing flashes of tough running, something we're not used to seeing from the second-year running back. Ronnie has been viewed as a scatback since he arrived in Denver, but he showed tonight that he can run between the tackles. Denver has a nice three-way running back rotation going on, but Hillman may be emerging as the feature guy. - Jon Heath

Dude had a great game again today. His bad week 1 performance is way behind him. Decker had 8 receptions for 133 yards, and 1 touchdown. He also had a long 61 yard reception where he didn't slip and fall! haha. All joking aside I liked what I saw from Decker tonight. He fought for the tough yards to get the first down a few times. So for the 2nd week in a row Decker gets my game ball! - Scotty Payne 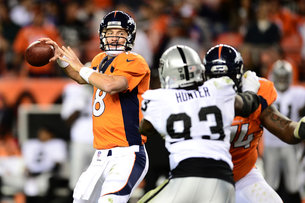 Is it just me or does Demaryius Thomas always seem to have a hundred yards or more? No touchdowns this game, but he came up big time and again. Plus, I just love that he is so consistent in this offense. It's hard for any wide receiver to go out every single week and not be shut down at least every once in a while. Tonight? 10 catches, 94 yards. - Tim Lynch

In Week One it was Shaun Phillips with two sacks, in Week Two it was Danny Trevathan with a sack and in Week Three it is Robert Ayers with two sacks-- he could have have four. Terrelle Pryor is an excellent scout team for what the Broncos defense will face in Week Four against the Philadelphia Eagles and I think that fans are seeing a trend developing here. The Denver defense isn't going to have a single player standout, it is probably going to be a new player every week, with players starting to repeat towards the middle of the season. As it stands Ayers has six solo tackles, four assists and three sacks on the season. - Ian Henson

Peyton Manning. Choo Choo! The MVP train keeps rolling along. Next stop, Philadelphia. Mr. Manning has really racked up some accomplishments in the first three games. He is already over 1,000 yards passing, 12 touchdowns, and no picks. The defenses are rattled and this offense isn't even firing on all cylinders yet. The train keeps rolling on and Bronco Country is enjoying the show. - Mr. East

He got a lot of hate last year but so far this year he's been money across the board and hasn't missed yet. So far this season he's 5 of 5 and is also perfect from 40+. This was a complete game and a lot of players will get there respect, but let's take a second and tell Prater we are sorry that some Broncos fans wanted him cut. - Topher Doll

Denver's undrafted, underrated star at linebacker had a great game Sunday; Wesley Woodyard is emerging as Denver's voice, tone-setter, and face on defense. How about eight tackles, second on the team? How about half a sack? How about that brutal hit on Terrelle Pryor late in the fourth quarter that let he and the Raiders know, loud and clear, that Denver's defense wasn't done until the game was over? Woodyard led a defense that stifled the Raiders for the vast majority of the game, particularly that Oakland rushing attack. Well done, Woody. - Monty

Darren McFadden 12 carries 9 yards. That is .8 per carry. Not even a yard per carry. Pryor managed to inflate the numbers with some good scrambling, but up to this point the Broncos front 7 have allowed 130 rushing yards through three games (42.5 yards per game). This isn't a mistake or smoke and mirrors. Our line is blowing up the offensive front and giving our fast LB's room to mop up whatever comes their way. - Bronco Mike

Who gets your MHR Game Ball? Take the poll or let us know in the comments.