After three weeks of play, Denver Broncos quarterback Peyton Manning has scored 12 touchdowns, more than every other offense in the NFL has scored this season. At his current pace of four touchdowns a game, Manning is on pace to throw for 64 touchdowns this year, which would be a new NFL record. 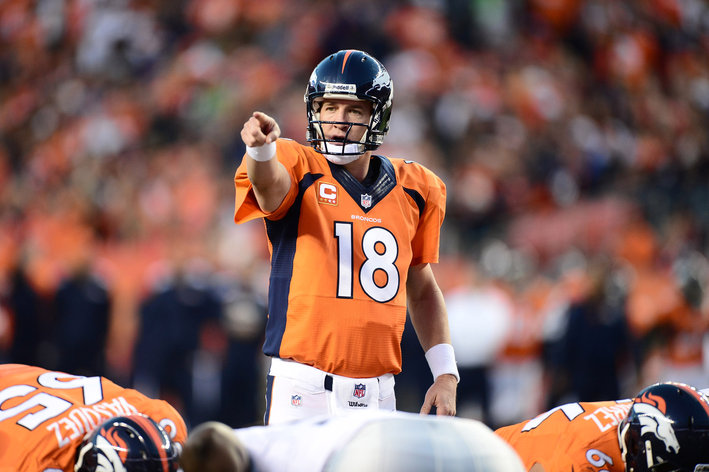 Broncos quarterback Peyton Manning has scored more touchdowns than every other offense in the NFL this season.

A slightly more conservative (and realistic) target number seems to be 50, which is the current record, set by New England Patriots quarterback Tom Brady in 2007. That's a number Manning should be able to reach—and surpass—this season.

If Manning averages three touchdowns per game for the remaining thirteen games of the season, he'll finish with 51 touchdowns. That's not an unrealistic average to aim for considering that Manning threw for three or more scores nine times last season and is off to an even hotter start this year.

Manning is on pace to break records this year, as is Denver's offense.

Denver's offense has run 213 plays from scrimmage this season (5th-best) and gained 486.7 yards per game (1st) while scoring 127 points (1st). The Broncos are on a 14-game regular season win streak, which ties a franchise record. The Broncos have won all of those games by at least a touchdown, which is the second-longest of such streaks in NFL history.

Denver's defense leads the NFL with six interceptions and 36 passes defended (probably because teams have to pass so much each week to try and catch up). The team's eight sacks rank 14th in the NFL and their 43.3 rushing yards allowed per game is a league low.

Linebacker Wesley Woodyard's 25 tackles rank 16th in the NFL while defensive end Robert Ayers' three sacks tie for the ninth-most. Cornerback Chris Harris has broken up four passes (tied for second) and intercepted two others (which is tied for second).

Kicker Matt Prater has gone a perfect 5-of-5 on field goals this season with a long of 53 yards. His 17 touchbacks rank first, though his 70.8 tochback percentage ranks only 13th. Punter Britton Colquitt's 40-yard net punt average ranks 20th in the NFL and his eight punts inside the opponents' 20-yard line rank fourth.