I'm known around here as the film guy and one of the stats guys. Anyone that's ever gone toe to toe with me in the comment threads knows I can be much more than that though. Bronco Mike can be a rabid, trash-talking BMF who will hand your ass to you and trololololol relentlessly if you say something stupid. I rarely get to air my grievances publicly however and that is going to change. There may be some strong language used (but no F-bombs) so read at your own peril.

If you didn't hear the news today, Terrell Pryor whined and complained like a little bitch about how the ass-whooping he took from Wesley Woodyard was an illegal hit.  His exact words were "I think he should get fined, definitely."

Sorry about the loss RaiderNation. I don't remember much ! Good hit by whoever it was. I heard our team fought well .. We will be back!

Ok, first of all you don't remember anything, so how the hell can you say someone should get fined?  Oh that's right!  There's tape.  Let's look at the tape shall we?

Now, wait for the 2nd angle to be shown.  Yes WW's helmet makes some contact, but it is Trevathan's action of holding Pryor that creates the awkward angle.  Woodyard lowers his right shoulder and is looking to wrap up.  That's a clean hit.  When it happened at the time, this was my reaction: 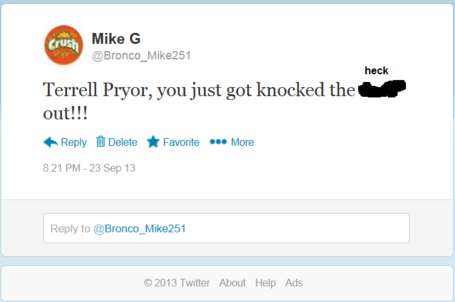 See?  I promised there would be no "f" bombs!

Now back to the hit, I've snipped two different angles: 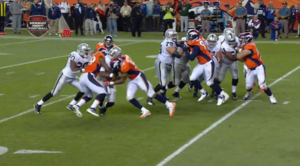 I think both show that WW was leading with the shoulder.  Had he aimed to hit him helmet to helmet, they'd still be scraping up Pryor's teeth from Sports Authority Field. Which brings me to my next point.  Pryor just needs to shut the heck up (still no "F" bomb).  Dude is a 2nd year project player that hasn't done a damn thing in the NFL.  This isn't Peyton Manning, Drew Brees, Aaron Rodgers, or even Mr. Gisele--he gets no special treatment from the refs.  And while were at it, he best recognize that if he's going to carry the ball like a running back, he's going to get hit like a running back.

Grievance #2: The Media and Chip Kelly

I watched Peyton's post game presser.  When it came to his now infamous "it was nice of the NFL to give them 12 days blah blah" portion that blew up for some reason over the past couple of days, nothing in the moment struck me as odd, or as complaining.  Peyton keeps the same tone.  I actually smiled when he said it because I thought to myself "he's being a smartass".  Well, now we have idiot reporters (because it's their job) to take one piece of his quote out of context and report it to the other teams' coach during his presser.  Before I get to that let me address this.

I hate gossiping.  Hate it.  Nothing worse in the world than a gossip.  Living in a small town most people do it.  When you don't have anything to look at other than  some prairie and a Loaf n' Jug, you have to get your jollies someway when not tipping cows.  But that's precisely what this reporter did.  Some asshat from the Denver media either tweeted it out first or wrote about it first, some national asshat lazily took that quote and tweeted it out, some other Philly area asshat then brought it up to Chip in his press conference and like a big game of telephone, you have a bunch of sucker bitching over something small and harmless (like the Patriot passing game at the moment).

So instead of blowing it off like a professional, this amateur from bum-heck Oregon (still no "f" bomb) said something more idiotic than Terrell Pryor:

Which is probably another lazily and asshated-ly reported selective quotation, but nonetheless, we'll roll with it.

This attitude wreaks of "oh yeah well we'll show you!"

We could play your house, we can play in our house.  Your college style offense with a turnover prone ex-convict at the helm will find some way to heck it up.  That's what you do.  You move the ball and then like some JV High School squad throw a pick or fumble the ball.  6 days, 12 days, 10 days, tomorrow, you're still getting your asses handed to you by the best team in the league.

You know what would happen if we played in a parking lot?  A stray dog would wander by and...... (you can fill in the blank yourselves folks!)  I think you should go back to using those giant pictures to help with your formations and calls.  Start with a giant "X" over Mike Vick fumbling the ball.

I understand the first two on there, goes without saying.  But Tom Brady?  Why?  Because his team is 3-0? Whoopdy-heckin'doo.  They beat two lowly division rivals who are starting rookie QB's by 5 points combined.  They also beat a team that just benched their starting quarterback and will probably fire their head coach soon.  Brady in those games has completed 57% of his passes with 5 TD's and 2 INT's to go along with a Buttfumble-esque 5.5 yards per attempt.  If Brady is an MVP candidate at this time then I suppose it is only a matter of time before Big Pete becomes a shining beacon of well-measured logic and rational thought. If we're awarding a "best dressed" award that is something Brady has a legit shot at.  Until then can the MVP talk.

Russell Wilson.  Wilson is still riding the coattails of his defense.  Outside of one fantastic performance, he's boasted 2 TD's to go along with 2 picks and 3 fumbles.  He's the MVP of "Castaway" and not much else.

I think I'll stop there this week.  Those are the biggest things that pissed me off.  Well, I got my shot at it, why shouldn't you get yours?  Talk about the #1 thing that pissed you off in the NFL world the past week and we'll have a true airing of grievances!