Gaining insight on Denver's Week 4 opponent through the eyes and advanced stats of Football Outsider.

The theme of this week? "Points will be scored," as the NFL's two top-ranked offenses in terms of yards face each other in Week 4. However, that is just one stat - how do the advanced stats of Football Outsiders grade the no-blink Philly offense and the no-huddle Denver attack?

Recall that in Football Outsiders VOA, negative scores are good on defense, bad on offense, specials, and overall. 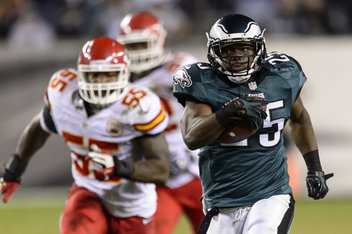 21.3% - 6th - The Eagles offense is explosive, but not as efficient as five other offenses in the NFL, suggesting they are capable of making big plays, but have yet to find a consistent rhythm. That should come as no surprise when one considers the adjustments Chip Kelly has had to make to bring his offense to the pro level. While Michael Vick is always dangerous, both on the ground and through the air, the key to stopping the Eagles is LeSean McCoy. The dynamic running back currently accounts for over a third of the Eagles' total offense. Denver's top-ranked rush defense will have their work cut out for them again in Week 4.

14.9% - 26th - Did I mentioned points will be scored? This is the part I was talking about. The Eagles defense is maligned, and they're allowing an NFL 7th-worst 28.7 points per game. Meanwhile, Denver's offense is flying sky-high with a monumental 42.3 points per game offensively - no other team in the NFL is averaging over 32. The Eagles passing defense is particularly vulnerable, opening the door for Peyton Manning to connect to his talented quartet of targets: Wes Welker, Eric Decker, Demaryius Thomas, and Julius Thomas.

0.0% - 16th - The Eagles are smack-dab in the middle of the pack with an even 0.0% VOA. Meanwhile, the Broncos boast the league's best unit, behind Matt Prater's perfect accuracy on field goals and extra points in 2013, Britton Colquitt's expert punting, and the ever-dangerous Trindon Holliday. Philadelphia's punt returner is averaging a tepid 4.7-yard return.