Denver Broncos fans and Philadelphia Eagles fans - are you ready for some offense?! Denver's Week 4 match against Philadelphia features two of the fastest offenses in the NFL this season. Peyton Manning's no-huddle meets Chip Kelly's no-blink. It's time for football! 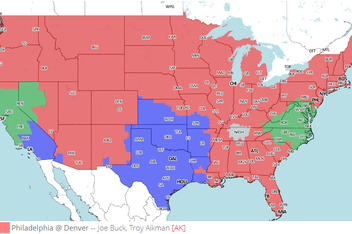 If you are in the red, you will get the Broncos game (click for more).

The game is the feature afternoon broadcast by FOX with their #1 team Joe Buck (play-by-play) and Troy Aikman (color commentary) calling the game with Pam Oliver reporting from the sidelines. In Denver, that's KDVR-TV FOX 31. Otherwise check your local FOX channel listing.

The Denver Broncos are 13-point favorites to win the game.