Share All sharing options for: Broncos set franchise record with 52 points vs. Eagles

It has been 50 years since the Denver Broncos put 50 points on a scoreboard. Led by the unbelievable Peyton Manning, they did that today. 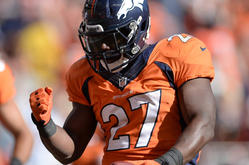 The Broncos went up 52-13 in the fourth quarter against the Philadelphia Eagles on Sunday, breaking a franchise record for points scored in a single game that has stood for 50 years. The previous high, 50 points, had never been matched by a Broncos team until now. Not by John Elway and Terrell Davis. Not by Jake Plummer or Time Tebow. Not by Peyton Manning in his first 20 Broncos games (he has come close a few times, including Week One with 49 points).

Even Brock Osweiler had a part in setting the record. After the Broncos went up 49-13, it was the second-year player who led the Broncos down the field for a Matt Prater 53-yard field goal.

This Broncos offense is special. Let's enjoy the ride.