NFL kickoff is only two days away... and so is the kickoff to the 2013 fantasy football season! To get you ready, here is some Denver Broncos sit/start advice from those who know the Broncos best... MHR.

WR Wes Welker - Welker and the New England Patriots played the Ravens twice last year. In each of those two games, Welker had eight catches for over one hundred yards, scoring a touchdown in the playoff game. The Ravens have not figured out how to cover this guy, and I don't expect that to change with Welker in orange and blue.

Ravens at Broncos: Know Thy Enemy 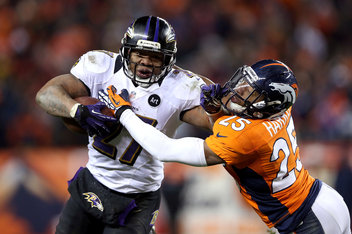 Part 1 of our in-depth look at the Baltimore Ravens

RB Ronnie Hillman - It isn't clear yet how well, or in what role, Ronnie Hillman will play for the Broncos this season. He will be the starting running back, but it is very possible that rookie Montee Ball will vulture away Hillman's goal line carries in a 1A-1B running back situation. Steer clear if you can until the RB picture comes a little more into focus.

Broncos defense - Without Elvis Dumervil and Von Miller to rack up points in the sack department, and without that pressure leading to valuable INT's, it isn't safe to start the Broncos defense. Look elsewhere if you have a better matchup.

WR Demaryius Thomas - Like Peyton, he should almost always be a weekly start, but his averages against Baltimore weren't great last year. He averaged 3.5 receptions for 25 yards, but he did score in the playoff game. Thomas is always capable of blowing up, so sit him only if you have a very strong matchup elsewhere.