Only the Best In Focus: The best Denver Broncos through Week 4

Share All sharing options for: Only the Best In Focus: The best Denver Broncos through Week 4

QB Peyton Manning - 18.8. Like all of his numbers this season (touchdowns, yards, completions, wins, NFL records), Peyton Manning's PFF grade is off the charts compared to everyone else.

RG Louis Vasquez - 8.7. What an underrated free agent pickup by the Broncos. Vasquez has been Denver's most consistent offensive lineman.

RT Orlando Franklin - 6.4. Broncos runners have had no trouble traversing the right side of Denver's dominant offensive line in 2013. 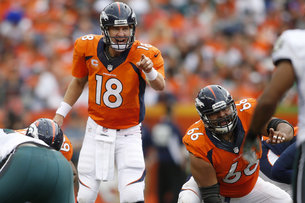 Denver's top performers from Week 4 include some overlap of the players who have excelled through the first quarter of the season.

From PFF's Week 3 Refocus on the Broncos-Eagles game:

Your Von Miller countdown should now be down to two, and really we haven't had to lament his absence for the Denver defense in the past month. Would their pass rush have been better with him on the field? Of course it would, but players like Shaun Phillips and Robert Ayers have done enough in combination with the offense to ensure opponents haven't been able to keep up on the scoreboard. Added to the three pressures recorded by Phillips (1 Sk, 2 Hu) and three hurries from Ayers though, was a cameo by Wesley Woodyard (+1.7 pass rushing) doing a lot of good work on delayed blitzes and reacting to scrambles by Michael Vick. He had a highlight-play on his sack by running over Jason Kelce to get to Vick, but plays in pursuit and clean up only built his presence as a pass rusher. His speed to Vick, having initially dropped into coverage, gave him the strange quirk of recording five pressures (1 Sk, 1 Ht, 3 Hu) in spite of having rushed the passer (by design) on only three occasions.

It's no surprise that Phillips and Ayers represent two of Denver's top three graded defenders through four weeks of the season.

CB Chris Harris Jr. - 3.8. How good is Denver's secondary if they are still expecting a healthy Hall of Famer in Champ Bailey any one of these days?

DE Robert Ayers - 3.3. Ayers has gotten one last chance as a starter in Denver, and he's making the most of it.

As I've said in previous "In Focus" pieces, these stats don't tell the whole tale. You have to supplement them with other stats, more analysis pieces, and most importantly your own two eyes with film study to really judge a players' worth. But as far as PFF is concerned, these are the Broncos players that are performing the best through the first quarter of this record-breaking 2013 season.