We're back to looking at the advanced stats of Pro Football Focus to highlight Denver's top three performers on offense and defense from their 52-20 victory over the Philadelphia Eagles.

Share All sharing options for: Broncos 52, Eagles 20: In Focus

RT Orlando Franklin - 5.4. Franklin was dominant in both pass protection and run blocking, grading out tops in both at 2.8 and 2.1 respectively. 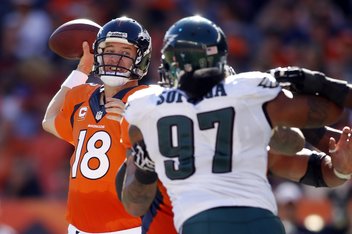 Tie - WR Demaryius Thomas and LT Chris Clark - 3.4. Demaryius Thomas had an impressive 2.5 grade as a receiver, but it was accentuated by his work as a blocker. He graded well as both a screen and run blocker. Speaking of blocking, how about Chris Clark showing up in Ryan Clady's absence, big time?

DE Shaun Phillips - 2.0. Phillips finished the game with two QB hurries including a sack, but his biggest contribution was in run defense, where he graded a team-high 1.4.

DE Robert Ayers - 1.9. Denver's bookends have been shutting down and chasing opponents all season, especially in the fourth quarters of games. Ayers had a strong showing with three QB hurries while setting the edge in the run game.

CB Dominique Rodgers-Cromartie - 1.7. While Chris Harris Jr. might not have been targeted once the entire game, DRC certainly was. He graded out well, facing DeSeaon Jackson most often and holding the Eagles playmaker to only two catches for 34 yards.

Which of PFF's highest-graded Broncos impressed you most?