Joe Flacco has some Chirpin' Chips

Any poker players out there?

Share All sharing options for: Joe Flacco has some Chirpin' Chips

If you played anywhere, for any amount of time you'll likely notice one dynamic sticks out more than any other. When a poker player is winning they're more likely to be outspoken and jovial. It's especially true after someone's one a big pot, or sucked out on the river (careful there--just another term for getting lucky when you got your money in bad). They are relieved by the outcome and rewarded by a temporary windfall. It's human nature to be more outgoing and sociable when things are going right.

Well our old pal Joe "Skinny" has some chirpin' chips after parlaying his Chris Moneymaker like two-outer suck out against our Broncos into a Jamie Gold like multimillion dollar payday. Here's some of the things he's had to say as of late.

"I love Ray, and I love how he always spoke from the heart, but if you listened to those speeches, a lot of them didn't even make sense....He meant everything he was saying, but I didn't know what he was talking about 90 percent of the time."

Clear as day to me Joe. He's not big enough, so if he lifts weights and practices and stuff, he'll get bigger and it will keep someone (I don't know who--maybe Flacco himself) from stealing his brains and heart. Whoever this unknown entity is what we know for sure is that he's either 1) a zombie or 2) a cannibal. So Ray Lewis is saying he's afraid of zombies and cannibals. Hell, I am too.

"Being hated is not a bad thing. ... I don't know if I'll be too popular after (saying) this: I (didn't) know how I really felt about Johnny Manziel. But I feel like now that everybody hates him, he's quickly becoming my favorite player in college football."

It's called "Swagger" Joe. Manziel has it, Bronco Mike has it, Scarface had it. It's an awesome quality to exude. That's what you like. Sometimes the awesomeness of one's aura is far too powerful for others to handle or process. Instead, the one with swagger is demonized as the bad guy. Ravens fans, I'm not really that bad of a guy, I just don't like you. Go ahead and point your tattered feathers but just remember, you don't have the guts to be who you want to be. Make a path mofo's this bad guy is coming through....

On the Ravens posters being posted on our stadium

"I think it's all deserved. I don't know if it's deserved toward me, but I happened to be the guy they put up there," Flacco said on a conference call. "I don't think anybody here, or anyone in our city, would be too happy if we had somebody else from a different team on our stadium. I wouldn't expect anything different than the people in Denver being pretty upset about it.

"I figure I'm getting some heat for it. But I didn't go post it up there myself. I said to somebody, 'It's kind of like high school. You remember some people going and taking away flags from kids' houses and stuff like that.' I didn't do that.''

There it is!!! The classic Ratbird trolling we've all grown accustomed to here on MHR!!! Now we know the source!!! How else could you explain the uncanny ability to spin an honest statement into a backhanded compliment like Joe did there at the end? We are in the midst of Greatness! Great sure, but Elite? Hang on a moment, I'll get there.

"Look at Peyton [Manning]," Flacco says. "He has guys on eggshells all the time. If they do the wrong thing, they're thinking, ‘S-, he's going to kill me.' And that works for him. But at the same time, I think it's tough to play in that environment. Sure, if you're not consistently putting in the effort, that's when I'm going to call you out. But if you're putting in a full effort and you do something that costs us the game, what the f- is yelling going to do? The game's over. Let's move on and get better."

That's what chirpin' chips do for you. You turn one of the luckiest (and misplayed) plays in NFL history into a good two-game run, win a title, get the payday, and finally after years find the balls to talk some trash. Kudos Joe, well done, nicely played--you have called out someone who's jock strap you're not qualified to sniff let alone carry.

Does Swagger translate to Elite?

This is like the "chicken v. egg" argument. For Joe Flacco, let's just say he's still in training. Here's some numbers for you:

Looks more to me like throwback numbers from a tougher era of passing rather than the cozy confines of today's NFL where the QB isn't hit and his receivers are not touched. But I know--"He just wins right? 9-4 in the playoffs baby, ELITE!!!" well... 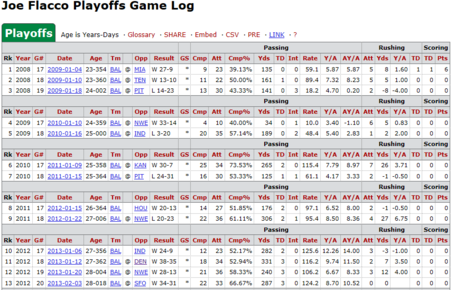 What you'll notice is that in Joe's first 6 playoff victories, the Raven defense allowed just 9,10,14, 7, 13, and 9 points respectively. That comes out to 10.3 points per game folks. All Flacco and that offense had to do was score more than 10 points and they were guaranteed victory. Notice also that in 14 games, Flacco has failed to crack the 60% mark 10 times? How about gem against New England in 2009 where he completed 4 passes and won? I can say honestly that Flacco carried his weight in about half of his playoff games.

He may be on his way to becoming the superstar Ozzie Newsome minted him as, but he's not there yet. Not saying he can't get there or won't someday. All I'm saying is that until "Sloppy" Joe finds some consistency, his swagger will remind me of this:

By all means Joe, keep chirpin'