You heard it here first - last week and over a month ago. 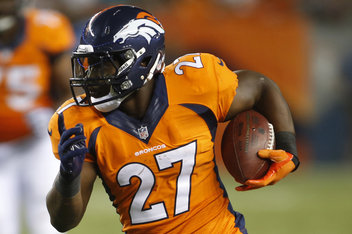 The Denver Broncos third year tight end transcended expectations in the first half of the Broncos' Week One contest against the Baltimore Ravens, and fantasy football owners are reacting in kind. Waiver wires around the world will be exploding with requests for Denver's third year tight end after his 110-yard 2013 debut.

That's because Julius Thomas hit the scene in a big way, on the national spotlight Thursday night, hauling in four catches for 97 yards and two touchdowns.

That was just in the first half.

The Broncos routed the Super Bowl champion Ravens 49-27 Thursday night, and Peyton Manning threw seven touchdowns. With that much passing production, there will be enough footballs to go around, and you can expect Julius Thomas to get his share of Manning's targets (he was targeted seven times during the game).

A starter (and a star) in training camp and preseason, we saw Thomas excel at gaining separation from coverage in the offseason. When we saw him emerge as first on Denver's depth chart, we knew he would have a fantasy impact this season.

Keep up with all of our Fantasy Coverage

We just didn't necessarily see this happening this quickly.

Thomas, a fourth round draft pick in 2011, had only had one catch in his NFL career until Thursday's (eye-) opener. An ankle injury knocked him out of his rookie season, and he struggled to see the field behind Jacob Tamme and Joel Dreessen in 2012.

That was then. This is now. And Julius Thomas is living up to the hype.

Fantasy football owners, add him if you can.