Get this Broncos fans....

Share All sharing options for: State of Ohio still traumatized by John Elway

The Columbus Dispatch reported on Friday that it was indeed John Elway who tied an NFL record with 7 TD passes in the season opener against the Baltimore Ravens. 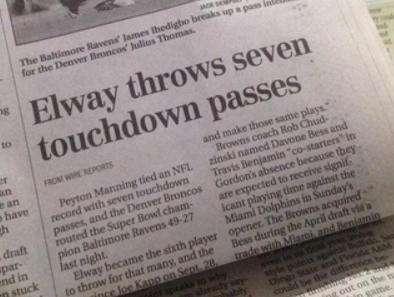 It wasn't just the headline that referenced John Elway, it was the body of the article and I quote "Elway became the sixth player to throw for that many, and the first since Joe Kapp on Sept. 28, 1969."

We of course can understand why an Ohio newspaper would still be so Elway-centric. There is "The Drive" "The Fumble", and of course "The Beatdown" all of which resulted in the Broncos advancing to the Super Bowl while the Browns were sent home. In fact lets take a look at Elway's performance in all three of those games:

This was the game dubbed "The Drive" in which John Elway led a 98.5 yard TD drive late in the fourth quarter to tie the game and send it into overtime. Rich Karlis booted the game winner and the Broncos were Super Bowl Bound for the 2nd time in franchise history.

Earnest Byner had a clear path to the endzone until DB Jeremiah Castille stripped him of the ball at the 2 yard line. There was 1:12 left in the game and the Browns were trailing by a TD. The Broncos ran the clock down and took a safety to end the game 38-33. This was a tale of two halves as the Broncos jumped out to a dominating 21-3 lead by halftime only to see the Browns comeback and make the game competitive.

Elway and co. complete the trifecta with three fourth quarter scores after leading by only a FG after the 3rd quarter. This was Elways finest AFCCG performance passing wise as he gouged the Browns secondary with big play after big play including a 70-yard bomb to Mike Young in the 2nd Quarter.

Final statline? 3 super bowl trips for the Broncos, and 888 passing yards for John Elway to go along with 7 TD's and 2 INT's.

Let's just say the entire city of Cleveland and the state of Ohio for that matter has and will always be Elway-phobic.

We own you Cleveland!