John Elway has his Championship window; up to players to seize it

Share All sharing options for: John Elway has his Championship window; up to players to seize it

When John Elway took the reigns of the Denver Broncos after the disastrous 2010 season, he had one mission - to bring the Lombardi Trophy back to Denver.

Upon hiring John Fox to be the new head coach, it likely didn't take long for both of them to realize the roster was lacking, especially on the defensive side of the ball. Tim Tebow flashed some excitement at the end of the previous season, but I'm sure after five minutes of tape Elway and Fox turned to Kyle Orton to lead the team.

We all know what happened after that. Kyle Orton floundered and the fan base, fed up with only five wins over a two year span, began beating the Tebow drum. Looking back today, I have to give Fox credit for doing something that apparently no one else in the National Football League is willing to do and that is give Tim Tebow the starting job at quarterback. Now I have to begin a rambling rant that covers just about everything I believe and see in this team and franchise, so hang on to your seats folks!

John Elway is following a very specific blueprint and we can see it clearly evident in the team we are watching today.

I honestly believe Elway's hope at that point was for Tebow to be a complete train wreck and for the Broncos to finish with the worst record in football. He is no fool and knowing Andrew Luck was going to be available in next year's draft must have been a mighty fine consolation prize for giving up on the season five weeks in. I bet he was beyond surprised continuously through the subsequent six game winning streak, division title and playoff victory over the 12-4 Pittsburgh Steelers.

People will argue with me that Elway never intended to tank the season when Tebow was thrown in, but if you look at that situation with what we know now how could it have been anything else? No team, not even in the Canadian Football League, want to give Tim Tebow a shot at the starting quarterback job. Mark Sanchez suffered through the worst season of any quarterback in history and still Tebow sat on the bench there. Elway had to have had Andrew Luck or some other stud quarterback (Robert Griffin III anyone?) in his sights at that point in the 2011 season.

The truth in this is in how badly he wanted Peyton Manning. Elway knew his only chance to build a roster capable of winning a Super Bowl is through an elite player at the most elite position ... Quarterback. A review of recent history proves this point as nearly every Super Bowl winner over the last 20 years had either a Hall of Fame quarterback or one that is at least a Top 10 guy in the league. There are a few exceptions, but not many.

John Elway is following a very specific blueprint and we can see it clearly evident in the team we are watching today. When Elway pursued Manning, he knew he'd be able to instantly obtain a championship window of about 3 years before he'd need to really adjust the talent on the roster with new acquisitions. 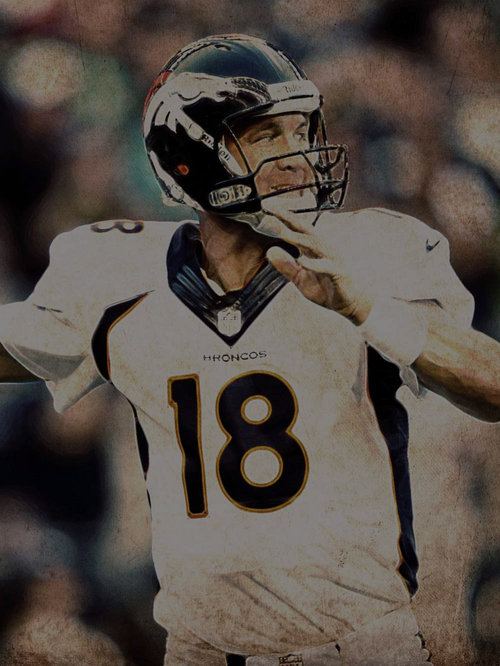 After Thursday Night, the Denver Broncos will no doubt be number 1 on this list

We are under year two of this window. I do believe Elway expected last season to be a year of "getting to know each other" under the new offense and a new quarterback, so to finish 13-3 with the number seed was probably a finish that was above Elway's expectations that first season.

In fact, the parallels to last season and how the 1996 season ended for the Broncos are astounding. Both teams were hastily being brought together in quick fashion. Both teams were in year two under a new head coach. Both teams were short in key areas on the roster. Both teams suffered heartbreaking losses in the playoffs. The question now is, will both teams follow that heartbreaking season with a Super Bowl championship? John Elway certainly hopes so.

Football is invariably about momentum and fate. I hate to be enigmatic, but I am a huge believer in this kind of thing. As a student of the game, things happen that just don't make sense or shouldn't happen.

For a Broncos example, in 1997 after suffering a stretch late in the season of three losses in five games, they would end up facing two of those teams in redemption games in the playoffs. One against the Kansas City Chiefs and the other against the Pittsburgh Steelers. Let's not mention the revenge game in the Wild Card against the Jacksonville Jaguars. The Broncos were the best team in football and the only way they could exorcise their demons against the Jaguars was to lose 3 out of 5 and fall into the Wild Card spot.

Let's keep the examples coming shall we. How about John Elway facing Dan Reeves in Elway's final game. In the Super Bowl. Or how the Baltimore Colts drafted Elway in 1983, then traded him to Denver, then Elway retires after the 1998 season - which also happened to be the year Peyton Manning was drafted. Who is now the quarterback for the Broncos. Seriously, you can't make this up.

Of course, after taking my tin foil hat off and ignoring all of the anti-fate types who are no doubt freaking out in the comments below I begin to realize what the real story here is. The 2013 Denver Broncos might just be the most dangerous offensive team in the franchises history. The jury is out, since this team will need to keep it up over the course of the entire season and playoffs to supplant the 1998 Denver Broncos squad, but for comparison sake's it's already close.

As probably one of the biggest Elway homers on the planet, I hate admitting that Peyton Manning is probably the better quarterback. I hate myself now. Obviously from this list, Terrell Davis is ten times the man of any running back on the Broncos current roster, but as much as I love Rod Smith, he has a fraction of the physical gifts of Demaryius Thomas and I think Wes Welker sort of cancels out the need for a dominate runner like Davis. Shannon Sharpe is easily better than any tight end on the current roster, but where the real difference is made is along the line of scrimmage. The only position the 1998 Broncos better the 2013 Broncos is at center. I'd take every single one of the other guys, with the only toss up being Schlereth and Beadles.

The 49-27 beat down of the Baltimore Ravens last night is only a prelude of what we can expect in the regular season.

Looking at this list and the contract lengths of the stars on the current roster only makes me even more confident that the Championship window for this team will remain open through the 2014 season. I think Elway already knows this, but I will say it anyway. If the Lombardi trophy doesn't come home to Denver at least once in the next two years then the Broncos will have squandered a golden opportunity. One which doesn't come often in the NFL.

The 49-27 beat down of the Baltimore Ravens last night is only a prelude of what we can expect in the regular season. The 1998 Broncos started their season out blowing people up too. Heck, the 1997 Broncos also lit up the scoreboards early. One thing is certain, Broncos fans, we're in for one hell of a ride!