In the third round of the 2012 draft with the 67th overall pick, the Broncos selected Ronnie Hillman out of SDSU. Hillman broke all of Marshall Faulk's rushing records at SDSU largely on his ability to break long runs. He was drafted to complement the RBs that we had at the time (KnoMo, McGahee, and Lance Ball) none of whom have breakaway speed or homerun potential. During his rookie season, Hillman was used fairly sparingly even after our feature back, McGahee, went down. Hillman was the youngest player in the league last season and even though he was listed as 190 lbs last season, he did not look that big and tended to play "small". That being said he got more usage as a rookie than he has this season. His goal line fumble in the Colts game has put him squarely in the doghouse, dropping him down to #4 on the depth chart. 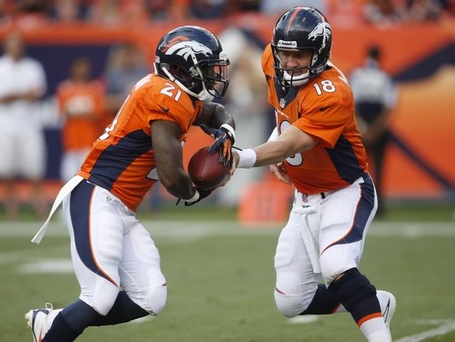 Hillman has had issues with ball security since college. I noted this while watching some film on him after we drafted him. There is film of him playing against Michigan in the big house where he fumbles twice in the game. According to those who followed him closely during his college career he was not as bad as that game would make him seem, but he has had ball security issues in the NFL. Apparently he hasn't shown enough in practice, whether it is ball security of break-away ability to move past CJ for the #3 RB spot.

Hillman was drafted to be the "home-run" threat, but in his 161 NFL rushing attempts, he has yet to hit a homerun. His longest run from scrimmage.is 37 yards. Hillman has gained 628 yds rushing (3.9 ypc) - including his 85 yards against BAL in the playoffs last year. Now, the argument has been made that Hillman has not been used correctly. One line of reasoning says that he just never gets enough carries to get into a rhythm, so he never gets an opportunity to break one when he is "warmed up." This argument has some validity since Hillman has only had 7 games (of 24, including the playoff game last year) where he had more than 10 carries. Unfortunately, guys who play the home-run threat role in the NFL as RBs generally don't get many carries and are expected to deliver the occasional long run even if they only get 5-8 carries per game. So let's address the other big question - Have we been using Hillman correctly. Hillman does have 25 catches in 24 games (201 yds, 8.0 ypr, 2 TDs) so we have used him as a receiver out of the backfield when he has been in the game. 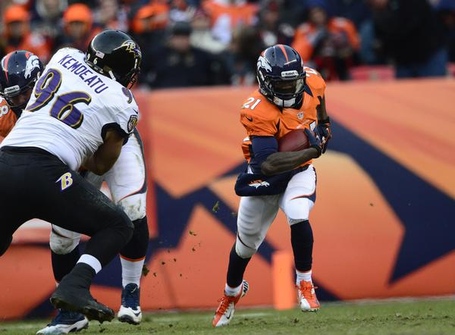 Thanks to pro-football-reference.com I was able to look at where Hillman has been run when we have run him. Here is a break down of all 162 carries by direction with results for Hillman:

So the argument that we have been using him wrong seems fairly valid - 69 of his 162 carries have been in the G-C-G area (up the middle). That's 43% of his runs. With his size and speed we should be using him on outside runs, yet only 43 of his 162 carries have been outside runs (27%). It should come as no surprise that he has had most of his success running outside (5.7 ypc). It is also interesting to note how little success Hillman has had when he runs behind the RG.

Will HIllman be activated this week? Anderson provides a much bigger body for special teams play, but HIllman (or Holliday for that matter) theoretically provide a guy on offense who could gain huge chunks of ground if we found a way to get them the ball in space. I don't know if Hillman's potential benefit outweighs Anderson's enough to give him the nod this week, but I'm guessing that Gase and PFM have a few extra wrinkles this week specifically to flummox Bellicheat. Hillman might be one of them.

Who is the active RB this week?