We're going to the Super Bowl!

Share All sharing options for: We're going to the Super Bowl!

We did it, Broncos Country.

We're going to the Super Bowl.

Of course, we didn't do all that much. We watched Broncos players and coaches do it.

Our recap of Denver's victory in the AFC Championship Game.

Peyton Manning did it, with 55 touchdowns in the regular season and 400 yards in the AFC Championship Game. Louis Vasquez did it, not allowing a sack on #18 through 18 games. Terrance Knighton did it, with a team rally late in the season and a 4th down sack of Tom Brady when it mattered. Champ Bailey did it, with a redemptive performance against the New England Patriots that saw him earn his first Super Bowl berth. Adam Gase and Jack Del Rio did it, with brilliant gameplans that showed the Patriots (and everyone else the Broncos faced) were no match for the 2013 Broncos.

All these Broncos did it. 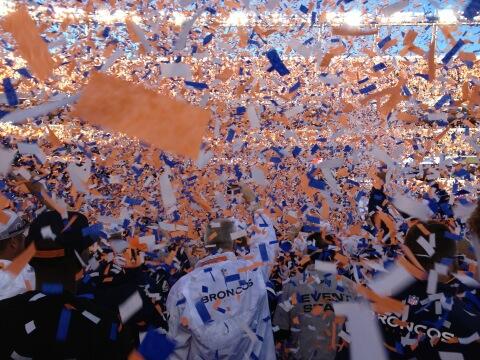 But we did it too.

The Denver Broncos will face the Seattle Seahawks in Super Bowl XLVIII on February 2nd, 2014. Here's everything you need to know.

"We couldn't have done it without these fans," Peyton Manning said. "And I am so proud of this team; we have been through a lot."

Broncos Country did it, because these players and coaches did it for the fans.

But we're not done doing it yet.

There is still one game left. One game to say, "WE REIGN SUPREME!"

This one's for it all!