Your first Super Bowl 2014 weather report expects it to be a cold affair for Peyton Manning.

Share All sharing options for: Super Bowl Weather 2014: A Super Early Look At The Weather for Super Bowl XLVIII

Super Bowl XLVIII will be the first Super Bowl to be played outdoors in a cold weather environment. The game will take place at MetLife Stadium - the home stadium of the New York Giants and New York Jets - in East Rutherford New Jersey.

Since there's some controversy about whether or not a Super Bowl should be held outside in a cold weather environment, the forecast for this game will be closely watched. You could even say, among all the players in Super Bowl XLVIII - Peyton Manning, Richard Sherman, Wes Welker - the weather is the biggest wild card of the bunch!

We are currently 13 days away from kickoff of Super Bowl XLVIII, so let's take a early look at the forecast for the game... 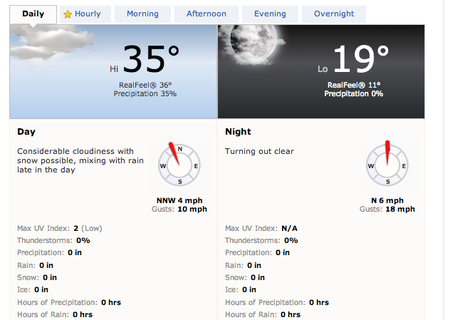 Accuweather is forecasting a high of 35 degrees with a 35% chance of precipitation during the day. The weather forecast for that night looks to be precipitation-free, but windy and cold. They're predicting a low of 19 degrees with gusts near 20 mph. That will give a real-feel of a brisk 11 degrees.

The popular Farmers Almanac predicted a winter storm to hit the east coast that weekend.

"It really looks like the Super Bowl may be the Storm Bowl," said Sandi Duncan, managing editor of the Almanac.

Being two weeks away from the big game, the forecast will change multiple times in the coming days. Right now it looks like it's going to be a cold windy night for the Broncos and the Seahawks.

How do you think Peyton Manning and the Broncos will handle the cold Super Bowl weather?