As we countdown the days until Super Bowl XLVIII, MHR will bring you a daily Six-Pack of nuggets on the Denver Broncos and the Big Game. Though the NFL is considering abolishing them, we'll even throw in some extra points!

Before we get to today's Six-Pack, there's some big news out of Dove Valley regarding Adam Gase, Denver's offensive coordinator and quarterback Peyton Manning's go-to-guy. Gase called the Cleveland Browns on Tuesday and informed them that he is withdrawing from consideration for their vacant head coaching position.

Gase is focusing on Super Bowl XLVIII and game-planning for the Seattle Seahawks' No. 1-ranked defense. Cleveland must now look elsewhere.

None of those players will be available for the Pro Bowl now that they have plans to spend the next week-or-so in New Jersey leading up to the Super Bowl. In response, the NFL named replacements for each Bronco unable to make the trip to Hawaii.

The Pro Bowl will be unconferenced this year. Former NFL stars Jerry Rice and Deion Sanders will serve as alumni team captains and select their respective rosters in the first ever Pro Bowl Draft on Wednesday (6 p.m. ET, NFL Network).

Just as expected, the Broncos have confirmed that they will be wearing their home orange jerseys for the Super Bowl. This will mark Denver's fourth Super Bowl wearing orange, they are 0-3 in the three previous contests. Of note, this year's uniform has been drastically altered since Denver's last Super Bowl appearance in orange.

Most notably, the helmet logo has changed and the shade of orange has been adjusted. So really, Denver is starting fresh with a completely new uniform making its Super Bowl debut. That's okay with you, right, Peyton?

It's settled then. Denver will wear orange, but not the orange of heartbreak. This orange will be victorious.

After missing the NFC Championship game, Seattle Seahawks electrifying wide receiver Percy Harvin is expected to practice this week and return to full health in time to play in the Super Bowl.

"We practice on Wednesday and there's a very good chance he will practice, based on how he was over the weekend," 'Hawks coach Pete Carroll told ESPN. "He was in pretty good shape on the weekend. He still has to go through a couple of clearances, but we're kind of counting on him to be ready.

The versatile Harvin has been battling concussions all season. If he plays, he will provide a tough test for Denver's defense.

The Broncos are heading to their SEVENTH Super Bowl in their 53 year history. There will be plenty of story lines for Super Bowl XLVIII, but this one is all about the ballers who put their stud cap on to take down Tom Brady and the New England P

The Super Bowl receives huge ratings every year, as do the Conference Championship games. The Broncos game against the Patriots last weekend drew 51.3 million viewers on CBS while the Seahawks win over the 49ers drew 55.9 million viewers on FOX, per ProFootballTalk.com.

While the TV ratings have been massive, neither the Broncos nor Seahawks have been established as large favorites for the game.

To quote from Kyle's story earlier today, "it's an intriguing matchup with no clear cut favorite."

In most cases, Denver is considered a 2-3-point favorite, a slim margin after being favored by as many as 28 points a game earlier in the year. The oods makers realize that this game could come down to as little as three points.

Such a close game decided by so few points would draw monster ratings for FOX.

The Super Bowl may be the last time we see extra points attempted in an NFL game. Because the PAT has become seemingly automatic, NFL commissioner Roger Goodell said on Monday that the league is considering abolishing it in place of a new scoring system.

"The extra point is almost automatic," Goodell said, via NFL.com. "I believe we had five missed extra points this year out of 1,200 some odd (attempts). So it's a very small fraction of the play, and you want to add excitement with every play.

"There's one proposal in particular that I've heard about," Goodell went on. "It's automatic that you get seven points when you score a touchdown, but you could potentially go for an eighth point, either by running or passing the ball, so if you fail, you go back to six."

Here's a reverse take on a meme that was floating around after Denver's Week 12 loss in New England: 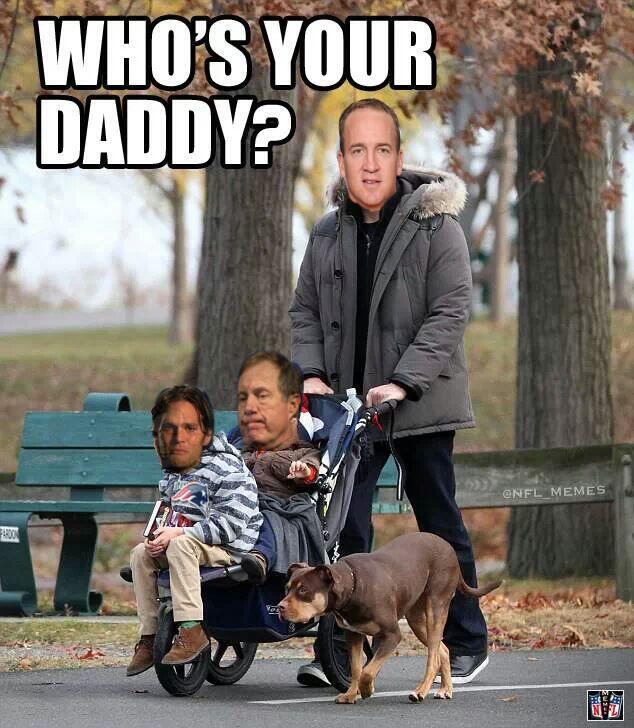 While we're at it, here's another meme worth sharing:

These two weeks are going to take forever. Savor the moment, though. When it's over, it's over:

This postseason, the Seahawks have allowed 32 points. Denver has allowed 33 (source).

It sounds as if the NFL will declare Wes Welker's block a legal play.

The old cliché that "defense wins championships" has been fairly true in past Super Bowls:

No. 1 offenses vs no. 1 defenses in the @SuperBowl, since the merger (via @ESPN). pic.twitter.com/5sm0BHxGFI

That's all we have for today, folks! Did we miss something notable? Share it in the comments below or shoot me an email so it can be included in tomorrow's Six-Pack!