Editors note: This article was written several weeks ago and scheduled to be published on the day of the 2014 Pro Bowl draft. Since the time this article was written, cornerback Champ Bailey has stepped up his play, Chris Harris Jr. has gone down with an injury and Denver has punched a ticket to Super Bowl XLVIII!

Nearly every high school and Pop Warmer team has one. That annoying head coach that plays politics and starts his own son over the best quarterback on the team.

Everybody knows the son is not the better quarterback, but he gets the nod, thanks to politics.

Chris Harris isn't only remarkably consistent—he finished his 2012 campaign with 12 straight games out of the "red" in PFF's rankings—he has developed a knack for making big plays. He returned two of his three interceptions in 2012 for touchdowns.

Make no mistake, that is why Denver Broncos cornerback Chris Harris Jr. was not on the 2014 Pro Bowl ballot. The NFL only allows teams to put two "starting" cornerbacks on the ballot, but Denver could have gotten around that stipulation.

Denver listed veteran Champ Bailey and rising star Dominique Rodgers-Cromartie as their two starters on the ballot this year. DRC came up big for Denver's defense, recording 31 tackles, defending 15 passes and recording 3 interceptions on his way to becoming a Pro Bowl alternate.

Bailey, on the other hand, started in three games in 2013 and recorded 14 tackles and defended 3 passes. Bailey was injured for nearly the entire season and was seemingly ineffective when he was healthy enough to play. Yet he was on the ballot instead of Harris, which can be explained only by politics.

Chris Harris Jr. played in all 16 games this season and started in 15. Recording 65 tackles, defending 13 passes and recording 3 interceptions, Harris locked down some of the top receivers in the NFL (players including Victor Cruz, Torrey Smith, T.Y. Hilton, Jason Witten, Reggie Wayne, Justin Blackmon and Dez Bryant) while playing the most defensive snaps of any Denver defender on the year.

.@ChrisHarrisJr played the most downs of anyone on the Denver Broncos defense this year. He only gave up one touchdown. #kufball

So why was Harris, the 2013 Darrent Williams Good Guy Award recipient, a player who only allowed one touchdown all year and was ranked third overall among Matt Miller's Top 100 Cornerbacks of 2013 not on the ballot?

Because he is a 24-year old former undrafted free agent that will get plenty of opportunities to earn Pro Bowl selections in his career. Bailey, on the other hand, is 35 and slowing down at an alarming rate. Sooner or later, Bailey may have to move to safety and eventually—gasp!—he'll have to hang up his cleats.

During his fifteen-year career, Bailey has earned 12 Pro Bowl selections, which is more than any other defensive back in NFL history, and the Broncos want to keep it that way. Bailey—though he was undoubtedly one of the greatest cornerbacks to ever play the game—is not the same player that he once was. A handful of Champ's Pro Bowl selections came on name recognition alone and Denver was hoping he could squeak one more in this year.

Bailey's days of being one of the top cornerbacks in the NFL are coming to an end, but Denver did not want to accept that. They stubbornly kept Champ on the ballot all season (they could have replaced him with Harris) and the result was Champ's first Pro Bowl omission since 2008.

Shame on the NFL for only allowing three cornerbacks on the ballot when a majority of NFL teams run nickel on more than half of their defensive snaps. Shame on the Broncos for playing politics.

Harris has started in 31 games since signing with the Broncos out of Kansas in 2011. Harris made the All-Rookie team in his first season and has totaled 198 tackles, 2.5 sacks, 31 defended passes and 7 interceptions since arriving in Denver. Arguably the team's best cover cornerback, Harris also draws praise for his textbook tackling, something that is refreshing to see in a league where form tackling has become a lost art.

Let's take a look at the film.

On the play below from Week 2 of the season, Harris is lined up against New York Giants slot receiver Victor Cruz. Though Harris was beaten and penalized, he showed flashes of brilliance on the play. 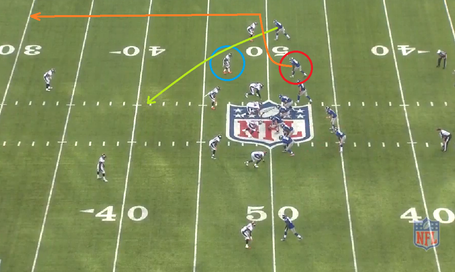 The Giants run a clean pick play on Harris (circled in blue), one of the hardest routes to cover. Harris is able to avoid the slanting outside receiver, however, and pursues Cruz down the field. 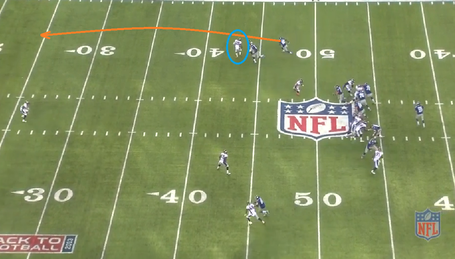 At this point of the play, Harris stumbles, giving Cruz and opportunity to completely burn him. Harris displays phenomenal recovery speed, however, allowing him to nearly catch up to Cruz. 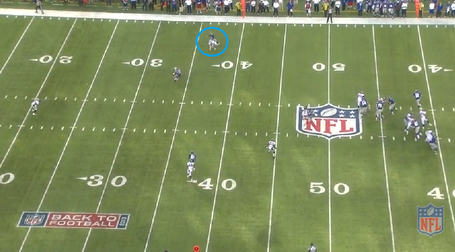 Now trailing Cruz by just the hair of his chinny chin chin, Harris has to make a decision. Either allow Cruz to keeping on cruising and score or doing everything possible to prevent Cruz from making the catch and live another down. Harris chose life. 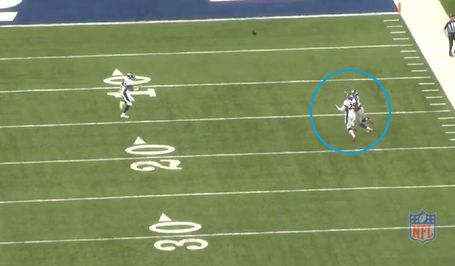 Harris is able to position himself between the football and Cruz and uses his inside hand to slow down Cruz's progress (the ball was slightly under thrown, so Harris did not have to blatantly foul Cruz). 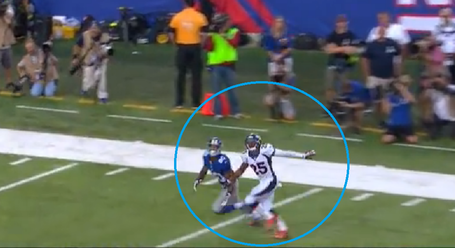 Had Harris taken a chance on the ball, he probably would have missed it (ala Rahim Moore), allowing a big play. Instead, Harris was penalized for holding on the play and the Giants gained five yards and a first down.

New York's drive ended up netting them a field goal and Denver went on to win the game 41-23. Denver ended up blowing New York away, but had Cruz scored on the play above, New York would have gone ahead 13-7 just before halftime. Would that have changed the ultimate outcome of the game? Probably not, but it would have made things interesting.

So why am I so quick to praise Harris for a play in which he was both beaten and penalized? Several reasons.

Rule No. 1 in the cornerback rulebook: When you get burned, don't let the receiver score. Try to catch him, trip him, tackle him, anything but let him score. Live another down and redeem yourself.

Harris covered one of the hardest routes and showed great recovery speed after initially tripping and had the brains to take the five yard penalty over the big play. Denver's coaching staff, though they may not admit it, had to have been pleased with Harris after New York ended up kicking a field goal.

In the play below from Week 7, the 5'10", 199-pound Harris helps prevent a touchdown by getting physical with 6'5", 258-pound Indianapolis Colts tight end Jack Doyle. 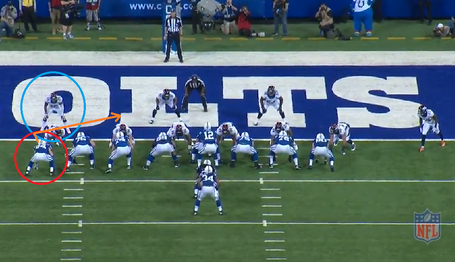 Doyle is running a slant and quarterback Andrew Luck wants to get the ball to him quickly. Because the route is run within five yards, however, Harris engages the tight end and Luck is forced to hold the ball. 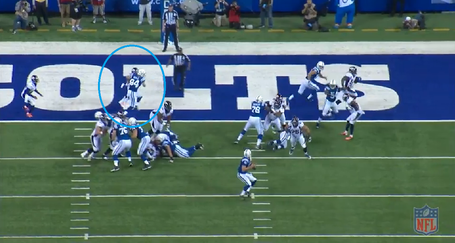 While Harris locks down Doyle and Luck's other targets fail to get open, defensive end Derek Wolfe and defensive tackle Terrance Knighton force Luck to make a decision by pressuring the quarterback. 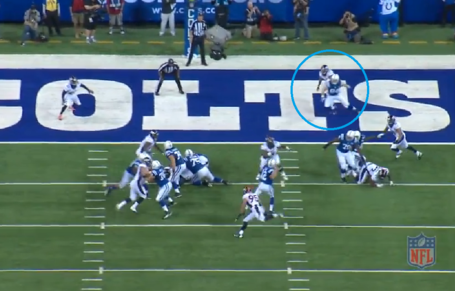 By this point the ball should have already been thrown, so Doyle attempts to alter his route by stopping and turning back towards Luck, but Harris has good inside position. Harris' positioning would have potentially allowed him to reach around and break up or intercept any pass thrown to Doyle's right hand side. This, in addition to the pass rush, forces Luck to throw the ball to Doyle's left hand side, resulting in an incomplete pass. 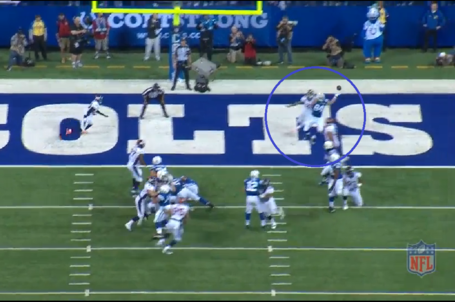 This should have been a boom-boom, snap, throw, touchdown play, but Harris disrupted the route from the beginning, forcing Luck to hold the ball. Because Luck held the ball, Denver's pass rush forced him to make a throw that his tight end was unable to catch.

In Week 4 against the Philadelphia Eagles, Harris was on the field for 35 defensive snaps and was not targeted once, which is the ultimate compliment for a cornerback. That's the kind of respect that is paid to Hall of Fame players (ala Champ Bailey in his youth). The fact that this is already happening to Harris suggests that there is a very bright future ahead of this young defensive back.

Harris can cover the tough routes, he has the brains to make a smart play, has the physicality to match up against tight ends, and his form tackling looks like it has been pulled right out of a Tackling 101 textbook. Harris is the perfect role model coaches should instruct young players to emulate for proper tackling technique.

Unfortunately, it is hard to capture the artistic beauty of Harris' tackling skills with a screenshot. Only video footage does Harris justice and the NFL does not allow SBNation to embed NFL.com videos (boooo, hiss, hiss!). Watch for Harris on Sunday, January 12 when Denver hosts their first playoff game of 2014, his tackling will stand out.

Nearly ten years younger than Bailey, Harris has many more bright years ahead of him. With so much talent, Harris is sure to earn many Pro Bowl selections down the road.

A free agent following this season, Harris made just under $1.4 million during his first three seasons with the Broncos. One of the most underrated cornerbacks in the game today, Harris is due a larger salary and Pro Bowl recognition in 2014.

Do not let him get away, Broncos.