Super Bowl 2014: How the Denver Broncos and Seattle Seahawks were built

You'd be surprised how differently these franchises financed a Super Bowl contender.

Share All sharing options for: Super Bowl 2014: How the Denver Broncos and Seattle Seahawks were built

The Denver Broncos spend $18 million a year on their 37-year-old future Hall of Famer Peyton Manning, making up over 12.5% of their adjusted salary cap. The Seattle Seahawks, on the other hand? They use less than 1% of their cap on their starting quarterback.

The difference, of course, is how they found their respective signal callers. The Broncos wooed veteran free agent Peyton Manning; the Seahawks hit gold with 2012 draft choice Russell Wilson emerging far more quickly than most expected.

Both the Broncos and Seahawks are paying a lot of money to players currently in rehab. Between Ryan Clady and Von Miller, the Broncos already found themselves out over $16 million for the year. The Seahawks have about half as much money on Injured Reserve, with wide receiver Sidney Rice's $9 million pricetag representing the brunt of it.

Investing in the trenches

Both teams, wisely, have invested heavily in their offensive and defensive lines. The Seahawks have gone all-out on the defensive line, making it their most expensive unit and nearly one-fourth of their entire adjusted cap. The Broncos did similarly on the offensive line, with big contracts paid out to Ryan Clady and Louis Vasquez this year, as well as a lot of money invested in Chris Kuper currently on the bench. Clady's contract doesn't count against the OL in the chart below, as it counts against Injured reserve, or you would see Peyton Manning's protectors taking up a much bigger piece of the pie. 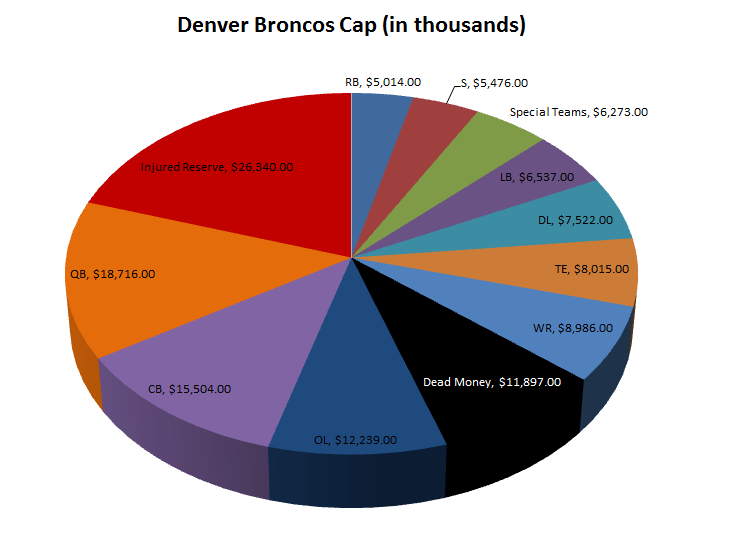 How the Broncos were built

You could say it all started with Peyton Manning, but in reality, it all started with Tim Tebow. The 2010 NFL Draft, which saw the Broncos select Tebow in the first round, was the point of time I would identify as the genesis of the Denver Broncos as we know them now. Demaryius Thomas, Eric Decker, and Zane Beadles are all starters on offense drafted that year, and more importantly, the eventual ascension of Tim Tebow would get the Broncos out of its multiple season slump and make Denver an attractive target for big-name free agents... such as Peyton Manning.

Once the Broncos landed Manning in 2012, they knew they had a Super Bowl window that would last as long as he didn't call it a career. They spent heavily on offensive weapons and impact defenders, headlined by signings like Wes Welker and Dominique Rodgers-Cromartie but truly supplemented by under-the-radar free agent additions like Louis Vasquez and Terrance Knighton. 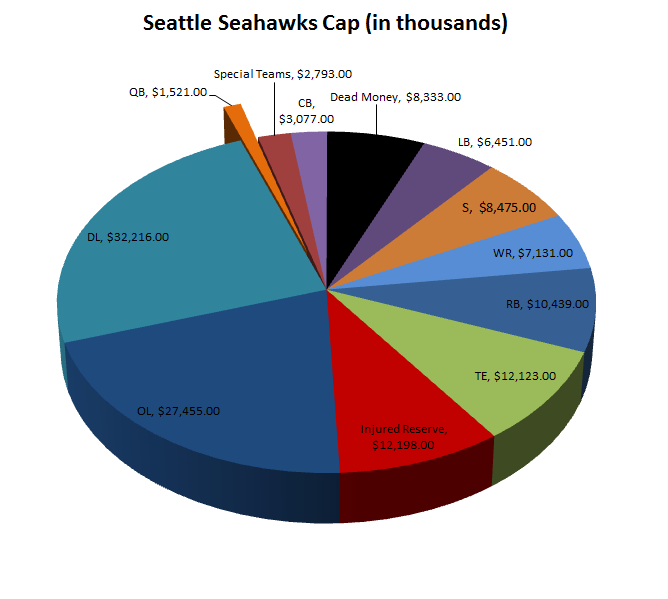 How the Seahawks were built

The Seahawks were also trying to court Manning back in 2012, and even reportedly had a plane waiting for him during his free agency tour in Denver.

Manning never got on, and the Seahawks were left with Plans B and C - those turned into free agent Matt Flynn and third-round draft pick Russell Wilson, respectively. Wilson beat out Plan B during the offseason (a preseason game against the Broncos played a big part in that), and now he'll try to take out Plan A in the Super Bowl.

The Seahawks drafted shrewdly in 2012 and 2013, with additions from 2012 including Bruce Irvin, Bobby Wagner, and J.R. Sweezy. (It figures, the Seahawks drafted Sweezy in the seventh round as a defensive end. He's now their starting right guard.) In 2013 they supplemented their defensive line with free agents Cliff Avril and Michael Bennett, giving them a formidable front against the pass and the run.

The Bottom Line (or Dollar)

The Broncos and Seahawks have invested very differently as far as the quarterback position is concerned, but everything else about these rosters' constructions is very similar. They both boast a healthy mix of undrafted playmakers, solid draft choices, and high-impact free agents.

They both found a quarterback two years ago and fast-tracked their way to the Big Game.

They both invested wisely.

Only one will get a Super Bowl ring as their Return On Investment.