Through the eyes of the Pot Roast: Terrance Knighton meets Google Glass

What happens when the biggest Bronco puts on one of the most high tech pieces of equipment?

Share All sharing options for: Through the eyes of the Pot Roast: Terrance Knighton meets Google Glass

"My teammates are going to be jealous."

Terrance Knighton knows he's in rare company. No, he's not talking about those who start in the Super Bowl. It's all about the tech on his head. 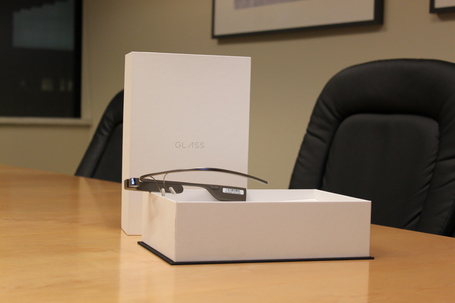 Many people have attempted to get their hands on Google's headset of the future. Few have succeeded. When it comes to the Bronco defensive tackle who we all know and love as "Pot Roast", we all should be glad he managed to land one.

This device won't be resting in Pot Roast's suitcase while he's in New York. Neither will it be used privately.

In fact, Knighton plans on holding Google Hangouts with fans. "I'm going to do as much as I can without wearing myself out," said Knighton about giving everyone an inside look during his time in New York.

Knighton hopes you'll join him when he holds these. When asked about what he imagines the fans will think about the Glass experience, Knighton stated "I think they'll like it. As much technology as there is out there, they've been waiting for something like this. This is the closest they'll get without actually being with us."

I think this is what they're waiting for

A man for the fans. Pot Roast understands that many players reach out through the traditional social avenues. This however will be something totally different. "You try to involve the fans as much as you can with Twitter and Instagram. You do as much as you can, but I think this is what they're waiting for," said Knighton.

Knighton said that he stops by here at Mile High Report every once and a while. Asked if he's seen what the fans have been saying about him, he responded "They're having fun with this whole "Skittles" and "Pot Roast" thing. I see a lot of that too with Marshawn Lynch. I'm pretty sure people would rather have pot roast than skittles."

Get ready for life through the eyes a three-hundred-thirty-five pound Brady smasher.

Although this device is cutting edge, it didn't take Terrance too long to get acclimated with it. After just a couple of brief instructions from Chip Hanna, the Director of Banner Sports (i.e. the geniuses who made this possible), he was up and running.

This is going to be something that no NFL player has ever done. A record that Peyton Manning can't even break.

When asked if wearable tech is his sort of thing Knighton responded, "Oh yeah. It's actually funny, I googled this before coming here. I've been interested in something like this. I'm just excited for the opportunity to use it and be the only guy there to have it. I'm going to try to capture as much as I can for the fans."

It was clear that Pot Roast was ready to give the fans quite an experience. This is going to be something that no NFL player has ever done. A record that Peyton Manning can't even break.

Just imagine the possibilities. Knighton boarding the plane with his teammates. The perspective of an interview on the famously chaotic media day. It all has never been seen this way by a fan before.

Knighton even gave his take on John Fox as a user. "He [John Fox] would probably be the most entertaining guy with it. Coach Fox is almost like a player. He's outgoing, he brings a lot of energy, he cracks jokes with us all the time, and he's hanging out in the locker room."

Even though you probably won't see John Fox with a pair on his head, other envious Broncos may take their turn. When asked which teammates would be the jealous ones, Knighton answered "Shaun Phillips, Demaryius Thomas, and Wesley Woodyard. The outgoing guys on the team."

Knighton is getting a little bit a razzing from his teammates about all of the recent media love. "They're always getting on me now because after I got that sack everybody wants to interview me and this Pot Roast thing is just blowing up," said Knighton of his teammates.

But the big plays are still going to come, as is the media. Outside of his Google Hangout sessions, Knighton will also be sharing videos to his Google Plus page. You can visit it here.

Even though Knighton is pioneering this experiment, he won't let it get in the way of his preparation. "Come Wednesday, it's back to focusing and going through our regular regimen," said Knighton.

So fans, get in those hangouts while you can and remember to check his Google Plus page regularly.

Stay tuned to MHR for more information about the Google Hangouts with Pot Roast. We'll keep you posted!