Super Bowl Weather Update: A Week Until The Big Game

Your Super Bowl 2014 weather forecast calls for seasonable temperatures, but will it snow or rain?

Share All sharing options for: Super Bowl Weather Update: A Week Until The Big Game

Fox: "To be a championship football team, you have to be weather-proof."

Super Bowl XLVIII will be the first Super Bowl to be played outdoors in a cold weather environment. The game will take place at MetLife Stadium - the home stadium of the New York Giants and New York Jets - in East Rutherford New Jersey.

Since there's some controversy about whether or not a Super Bowl should be held outside in a cold weather environment, the forecast for this game will be closely watched. So since we're a week away from the Super Bowl, lets take a look at the current forecast. 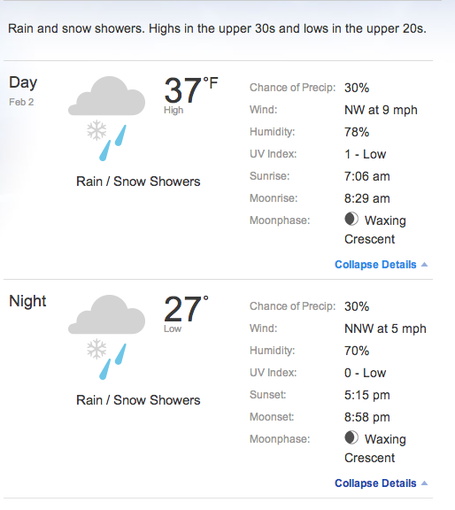 Not a bad looking forecast if you ask me. A low of 27 degrees, with only a 30% chance of Rain/Snow. Also the winds wouldn't be a factor with winds at 5 mph. Things could be much much worse in New Jersey in early February.

Weather.com has a cool article on the potential weather scenarios for the Super Bowl. Here's their two main weather stories that they're focusing on.

The NFL seems to have dodged a bullet here with this current weather forecast. We're still a week away until kick off so there's plenty of time for this forecast to change.

Either way the Broncos will be prepared to go out and dominate no matter the weather conditions. Also as MHR's own Bronco Mike pointed out, the narrative that Peyton Manning cannot play in the cold is nothing more then a myth. So the cold will not effect Manning next weekend.

How do you think Peyton Manning and the Broncos will handle the cold and possibly snowy/rainy Super Bowl weather?