Each day this week I will be breaking down both the Seahawks and Broncos by their perspective units. In a game that very well could be decided in the trenches, we will continue by taking a look at the Seahawks Defensive Line vs. the Broncos Offensive Line.

Seattle is a lot like Denver in that they run their defense from a 4-3 Under/Hybrid front. Against heavy personnel (for instance when the Broncos run 2-TE sets) expect to see this personnel: 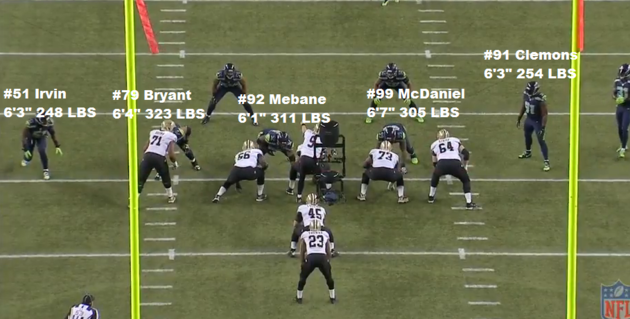 The Big tells here are Red Bryant as a 5-tech and Brandon Mebane as your NT. SAM LB Bruce Irvin will play off the edge from the 9-tech. Tony McDaniel will be your other DT. This configuration is meant to stuff the run, you're only getting 11 sacks total from this front with Mebane the lone Seahawk yet to register one (pro football focus).

What we are most likely to see on Sunday with the Broncos running their offense primarily out of 11 personnel are the Seahawks "Nascar" front comprised of pass rush specialists: 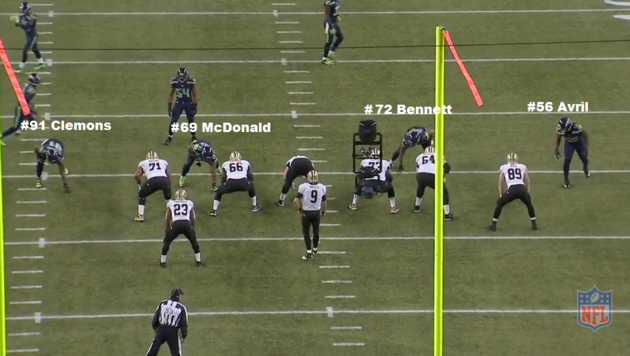 From this front, we have a total of 29 sacks with Avril and Bennett leading the way with 9 apiece. This line is built for speed and mirrors what the Broncos did with Von Miller in the lineup. You will see both DT's line up as 3-techs with the edge rushers lining up wide from about the 8 or 9 tech. Seahawk fans can chime in with their expertise, but my feeling is the front is very malleable with the ends being able to flip sides along with the DT's. A favorable matchup from Seattle's perspective already looks like Bennett against Beadles.

Similar to the Broncos defensive line output, Seattle registered 75% of it's 49 sacks from the defensive line. Outside of Bryant and Mebane who are run stuffers exclusively, this lineup also has a lot of flexibility.

Against the run, the smaller pass rush specialists have struggled which is something to keep an eye on. You might end up seeing a hybrid front like the Broncos utilized this season with Brandon Mebane playing some nickel downs inside just to help keep the Broncos running game in check from 11 personnel. That would be one way the Seahawks could keep from becoming one dimensional against the run or pass. Common sense tells you to run against the smaller faster guys and pass against the bigger slower guys.

Against the pass, this unit is a big reason why the Seahawks are so good on defense. This is not a group that you can hold the ball against, and unlike teams with maybe 1 or 2 pass rush threats, you cannot scheme against them because they pose a threat across the board. When I get into the tape a little bit more in depth I would like to see how much this team stunts. From the look at their snap numbers, it does not appear as they are a team prone to doing a lot of zone blitzing or dropping linemen into coverage. In fact I only see those numbers coming from the ends (Avril, Clemons). 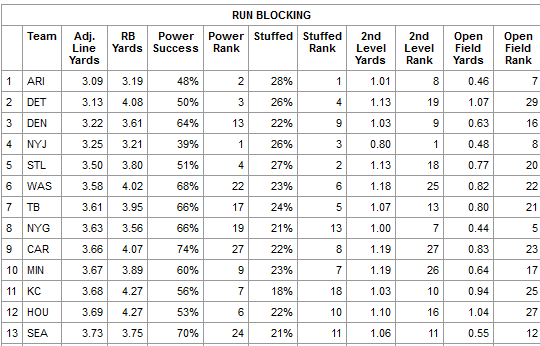 Again ignore the 1st two categories, I'm not interested in these numbers.

- Opposing teams converted 3rd/4th and 2 or shorter and goal to goal situations from within the 2 yard line at a 70% clip against Seattle. This places their defense in the bottom 1/4th of the league.

- Opposing teams get hit at or behind the LOS 21% of all rushing plays which makes them a top 11 team in this category.

- Opposing teams average 1.06 yards in the 2nd level of the defense and .55 yards in the open field, both of which are top 12 marks.

If the Broncos can keep the down and distance manageable on 3rd down, I see no issue in the running game being a possibility to convert.

Again, you have to read this backwards. In other words Left End is from the Offenses POV meaning it is against the RDE. Folks had a tough time rushing off the Left edge with Bryant and Irvin there. Surprisingly higher numbers against the middle and guards. If the Broncos can find the right edge, the Seahawks give up more ground here than any other spot on the field.

I think this aspect of the Seattle defense deserves some more detail so I will be saving my analysis for a future article. 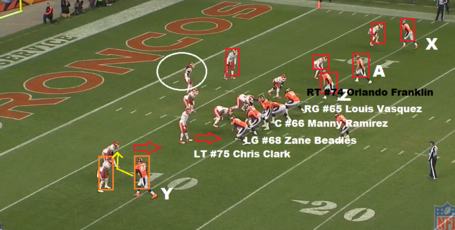 This was an old snip I used to describe a Manning to Julius TD pass, but doubles as a model for what Seattle will face up front.

The entire right side of the Bronco line graded out positively in the running game, Beadles and Clark were negatives on the left side. The two weakest links on this line in the passing game are Clark and Beadles. Clark struggles with speed and length. Beadles struggles with size and power. Last week against a rangy guy like Chandler Jones with a massive wingspan, Clark drew two holding penalties instead of giving up the sack. Zane has come on lately though. In the past five games he has not allowed a sack and has only given up 6 hurries.

These grades are subjective, don't take them as gospel (as we will see later)

- Broncos 64% rate in power situations (3rd/4th down goal to go inside 2-yard line) is good for middle of the pack ranking.

- Only 16% of their running plays result in the RB being stopped at the LOS or behind.

- Tough running and effective blocking to the second level have the Broncos averaging the 3rd best rushing average from the 2nd level, and the 4th best average in the open field.

Again, if 11 personnel dictates the Nascar pass rushing personnel, Knowshon and Ball should have the opportunity to break some big runs.

Remember how the right side struggled most in run blocking according to PFF? Well here we only see it off RT which can be indicative of a lot of things. I have no interest in starting a metric vs. metric war, but the Broncos averaged above 4 YPC in every direction except for RT.

2.33 seconds. That is how long it takes Manning from snap to release. This helps out a lot with pass blocking. Vasquez struggled with no one. Franklin struggled at times when he was hobbled with an ankle injury. Beadles as stated earlier struggled with power and leverage while Clark struggled with speed and balance. Against this rush, the Broncos have to muscle up a little bit and definitely get the play action game going in order to give Manning extra time to take shots downfield.

When the Broncos Run the Ball: Advantage Broncos O-Line

The Broncos are not going to line up in a bunch of 12 personnel and try to run the ball on Seattle's bigs. They are going to run a lot of 11 personnel, spread things out, and run the ball against that smaller lineup. Will Seattle adjust and stick Mebane into the quick rotation? Perhaps. Until they prove they can shut the running game down, Denver has a distinct advantage here.

When the Broncos Pass the Ball: Advantage Seahawk D-Line

I was real close to calling this even with Manning's quick release. Truthfully, the Broncos can dictate personnel and keep players on the field with no huddle so this is another tactic to limit substitutions and get that front tired. On the other hand, strength against strength, each DL is a capable pass rusher. I have seen them get far too much pressure with just the front four to dismiss their production altogether. This will be close and the winner in this matchup might very well tip the scales with some impact plays and/or turnovers.

When the Broncos Run the Ball: Matchup to Watch

Mebane vs. the Broncos interior. The Broncos pride themselves on getting yardage up the middle. Over half the time they attack the Center/Guard range of the defense. Mebane is a monster, every bit as capable of disrupting the backfield as Pot Roast.

When the Broncos Pass the Ball: Matchup to Watch

Michael Bennett and Clinton McDonald are to be watched against Louis Vasquez and Zane Beadles respectively. Peyton does better against an interior rush but might not have much room to operate around the edge if Clark or Franklin struggles as well.

Tomorrow, I will preview another positional group battle between these two teams.