Things are shaping up to be perfect football weather. Cold, but not freezing. Windy, but not blustery. Dry, but overcast. Love it!
New to Mile High Report? Sign up here and join the discussion!

The weather forecast for Super Bowl XLVIII has improved dramatically since earlier in the week. Peyton Manning and the Denver Broncos will be looking at the mid-40s at game time to high 30s by the end of the game. With moderate wind speeds and very little chance of precipitation, there will be no excuse for this team to continue its march for the Lombardi Trophy. The chart just keeps improving each time I check, just yesterday it was supposed to be slightly cooler than it is now today. Either way, things are shaping up to be perfect football weather. Cold, but not freezing. Windy, but not blustery. Dry, but overcast. Love it! 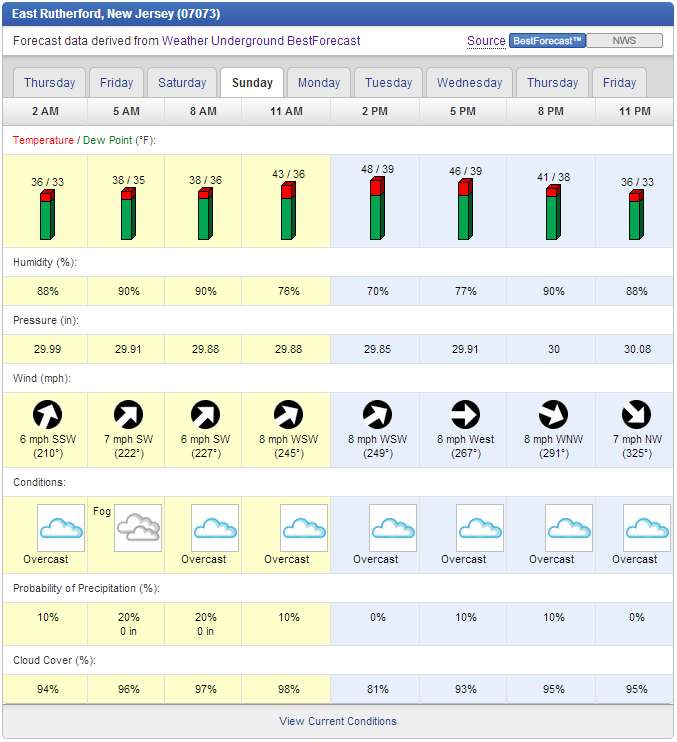 The Denver Broncos took to the indoor facility yesterday to work on the finer elements of Super Sunday's game plan. I love the massive banner of the Lombardi Trophy hanging from the walls of the practice facility. That's got to give players a little extra motivation as they go through their routines.

For those interested- my view of @Broncos practice today at Jet's facility-warmer inside for sure. #gopro @GoPro pic.twitter.com/8YU7u9v0dx

3. What Kind of Broncos Fan Are You?

Westword Blogs came out with an article covering the Top 12 Broncos fans you have probably met in your lifetime. Reading through the list I can see quite a few commonalities with certain people I know and if I had to grade myself then I would have to go with "The Curmudgeon". I'm not 60+, but on game day you better shut your trap and let me get my Broncos fed to me in a steady dose via radio, television and web.

What cracked me up was the labels I began putting on those of you heavily active in your game day threads.

4. Politicians Are Idiots (Or Are They?)

I tried to downplay the political hate earlier this week over that Washington Senator's snafu on Twitter, but now we have our own Colorado Governor renaming mountains for players. Seriously? As a historically-minded person, this is about the most short-sighted stupidity I've ever heard of.

However, then I read the proclamation and saw that he only enacted it for Super Bowl Sunday. Therefore, I am fully on board with this awesomeness. What can I say, it won't negatively affect history and I love me some Broncos ... so...

A company called Market Wired conducts an annual study on Twitter over how much people are tweeting about the big game. The dropped this infographic a few days ago and lo and behold there's Mile High Report staffer Bronco Mike right there as one of the biggest Broncos tweets on the net.

All-world stud tight end, Vernon Davis, of the San Francisco 49ers said on SiriusXM Radio yesterday afternoon that he would love to play on the same team as Peyton Manning before his career is over. Considering Manning only has a couple of years left anyway, this is something that would have to happen soon.

Even more damning perhaps is that Vernon doesn't seem to like getting laid out whenever Colin Kaepernick throws him a pass. This was something I saw all year long having watched a lot of 49er games. If I were him, I'd want to play for a better quarterback too.

I don't know about you, but the thought of having Vernon Davis and Julius Thomas on the field at the same time makes my head hurt - especially when factoring in Demaryius Thomas, Eric Decker and Wes Welker. It's like too many weapons man!

Vernon Davis on Peyton Manning "I would love the opportunity to play with him before my career is over." @49ers