The Seattle Seahawks believe they are prepared and equipped to halt the Denver Broncos' top-ranked all-time Offense.

I spent some time asking Seahawks coaches and players questions about the Broncos offense Thursday in order to better understand their plan of attack, and their mentality heading into Super Bowl Sunday. Here are my thoughts.

There is a healthy respect for Denver's number-one ranked offense among the members of Seattle's top-ranked defense. Players and coaches from Seattle spoke highly of their upcoming opponent throughout the week.

But there is no fear among these Seahawks players preparing for Super Bowl XLVIII, now only two days away. Their confidence and respect for their own play trumps that.

"Everything is attack mode," Seahawks safety Earl Thomas said on Thursday, "especially when you know. When you know, you just go. You don't think; you don't second guess yourself.  That's all about playing with the absence of fear. You just go."

The Seahawks believe they know what the Broncos will do on Sunday, because it has worked for the Broncos all year. Similarly, the Seahawks said they will not change their routine or shy away from their strengths just because their opponent happens to be Peyton Manning.

There are three keys to disrupting Peyton Manning's record-breaking offense, according to the Seahawks players I spoke with Thursday and Wednesday. Those keys are:

Every one of them is a battle of strength vs. strength. 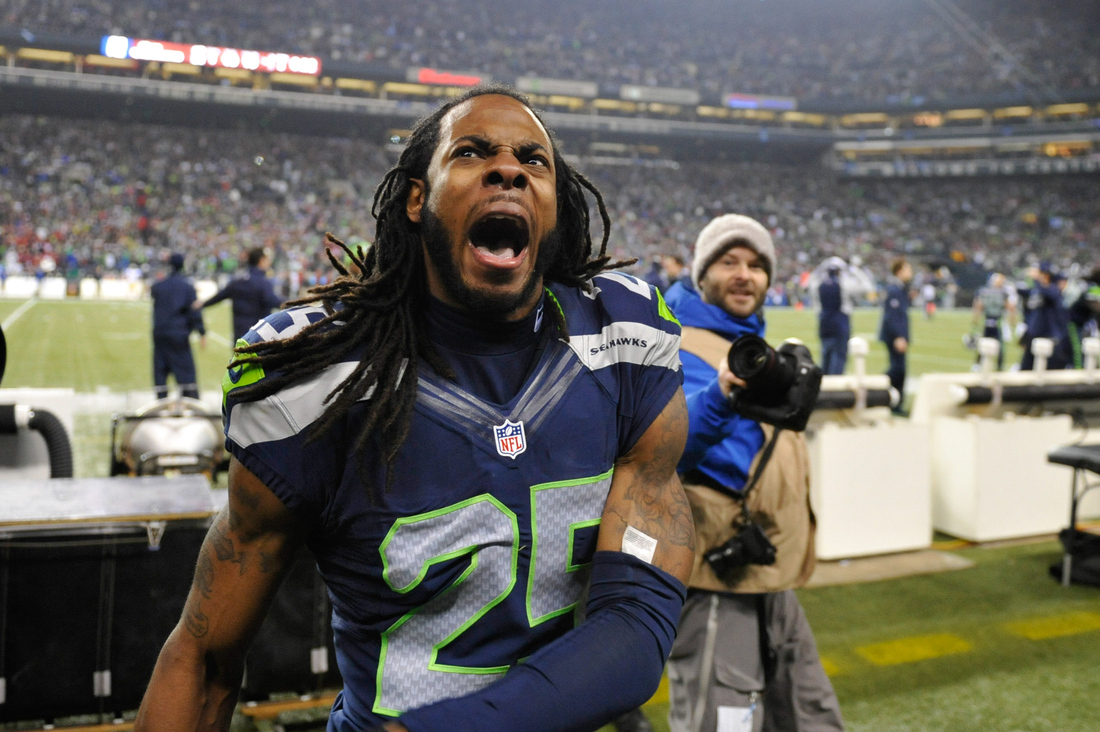 "We need to move him," head coach Pete Carroll said Thursday. "We need to get him off the spot so he has to move, so he has to adjust. When he's in rhythm and solidly in the pocket - which he is a great majority of the time - then you're really dealing with the best he has to offer."

The Broncos are terrific at protecting Peyton, and similarly, Peyton is terrific at protecting the Broncos. Manning was only pressured on 22.7% of his dropbacks this season - a league best. One key to that success is the talent on the offensive line, man for man. Another is how quickly Manning gets the ball out of his hand and into his receivers'.

"It's very tough," linebacker Bobby Wagner said. "They do a great job protecting him, but that's we've got to do."

Seattle brings pressure in a variety of ways. While Michael Bennett and Cliff Avril boasted nine sacks apiece, linebackers and defensive backs accounted for 11 sacks between them. Other defensive linemen added 20 to that total.

"When he walks off the field, he's got to feel us," said Wagner.

The Seahawks have been good at getting pressure on opposing QBs, but a lot of that starts in the secondary. The inability for receivers to get open has led to players like Avril and Bennett getting in their enemy's face, just in time.

"I just think we want to do what we do every week," Bennett said. "We've faced some of the best quarterbacks in the league, and I feel like we've worked every game."

"We can face as many great quarterbacks in the world as possible, but the receivers and stuff still have to get open," Thomas said. "The quarterback can't just make magic happen and all of the sudden the ball appears."

The Broncos have a very deep and talented wide receiver corps, famous for boasting four pass-catchers with over 10 touchdowns this year, but that still didn't sway Thomas.

Meanwhile, the job of protecting Peyton Manning has become so important to Broncos offensive linemen that they joked about pushing teammates in practice, even when they're just walking by Manning in the hallways of Dove Valley or on the practice field. The mindset of not allowing a defensive player to touch Manning is so endless, so continuous, that his protectors won't even allow it in the break room. Play through the whistle? Try play through the Super Bowl.

The battle to get in Peyton's face will be strength vs. strength.

"We're very aware of the pick plays and when they show up, we're going to hit them."- Seahawks linebacker Bobby Wagner

Consider Denver's offense broke so many records this season, it can't be that easy though, can it?

"They have a lot of tells. It's in the little details, but it's there," Thomas continued.

First and foremost, the way Denver lines up will be a good indicator of their intentions. "You're not going to get pick routes when the receivers are spread apart," said Thomas. "That's common sense."

The Seahawks also don't expect Manning to push the ball downfield early - their Cover 3 is too good with Thomas and Cameron  - and they know the Broncos are a team that excels at yards after the catch. Therefore, when they see the right look, they can expect the pick.

They plan to disrupt Denver's pick plays by exceeding the receiver's physicality. When they see a potential pick coming, they will deliver a hit, not receive one.

"At the end of the day, watching film, I don't think anyone ever hits (Broncos receivers), they just take the pick play," Wagner said. "We're looking, we're very aware of the pick plays and when they show up, we're going to hit them."

They are in "attack mode," as Thomas said.

That type of downfield physicality is something the Patriots did to Broncos receivers in the AFC Championship Game.  Infamously, a hit between Julian Edelman and Dominique Rodgers-Cromartie led to a similar blow between Wes Welker and Aqib Talib a series later. Talib was knocked out of the game, Bill Belichick questioned Wes Welker's intentions, and a big controversy spun in circles for a week.

Can the Seahawks find a way to hit Broncos receivers during rub routes within the rules of the game? It will be interesting to see if the officials allow it. Strictly speaking, this type of physical counter to Denver's rub routes would often constitute defensive pass interference.

That's why the Broncos are known for doing it so well.

The Seahawks finished something called Turnover Thursday yesterday - a day of practice focused almost entirely on turning the ball over.

"I like to call it No Turnover Thursday," quarterback Russell Wilson joked.

It's something Pete Carroll instituted long before Super Bowl week, and it's paid dividends for the Seahawks throughout the regular season.

"We've done this so many times before that there's a tenor, there's a focus you can feel," said Coach Carroll. "There's an energy level, enthusiasm moving from drill to drill and the way we practice."

"It's intense," cornerback Richard Sherman said. "We go really hard at practice. The defense has won most of the time in getting the turnover, and I think that manifested itself in the games. But it's going to be competitive. The offense isn't going to try and give us a chance. They don't give us very many opportunities."

Peyton Manning has only been intercepted nine times this season (against 55 touchdowns), meaning the types of tip-drill turnovers the Seahawks like to create may be hard to come by. Instead they can test the ball-security skills of Denver's receivers and running backs, who will be prime candidates for yards-after-the-catch opportunities. Some Broncos like Montee Ball and Eric Decker had issues with fumbling earlier in the year; the Seahawks probably spent a good portion of practice Thursday trying to exploit that.

The over-arching theme of this Super Bowl is Strength vs. Strength. Offense vs. Defense. But that theme doesn't end with Offense vs. Defense. The Seattle Seahawks and Denver Broncos are matched strength for strength at every level - in pass protection vs. pass rush, depth of receiver vs. the secondary, in ball control vs. causing turnovers, and man-for-man across the field. Demaryius Thomas vs. Richard Sherman. Brandon Mebane vs. Manny Ramirez.

Both teams are prepared to enter Super Bowl leaning on their strengths rather than mix things up.

"So we understand what's at stake. We understand how we play ball. And we know ourselves as football players. That's what's most important."