The Denver Broncos retain their spot as the most efficient team in the NFL, and we look at their success holding off opponents in the 4th quarter of games.

Share All sharing options for: Elevated Stats: Broncos are 4th quarter kings since 2012

Your team is up by one score in the game's 4th quarter, and the enemy is driving. You need a defense to hold on for the win and bust some would-be-comeback ghosts. Who you gonna call?

Do you hit up Rex Ryan and the New York Jets? Bill Belichick and the Patriots or Ray Lewis and the Ravens from the last decade? The Legion of Boom in Seattle? All probably good choices.

An in-depth look at the game from ProFootballFocus' perspective.

GIF and photos of Manning's three touchdowns vs. the Jets.

Add the 2012-14 Denver Broncos to the conversation.

Denver's 31-17 win over the Jets wasn't as clear-cut as the final score would suggest. Neither was their 41-20 victory over the Cardinals the week before. Both losing teams were within one score of a win or tie in the 4th quarter, and the Broncos defense had to step up.  They did.

They've made a habit of it.

This week's Elevated Stats show that the Denver Broncos have become fourth quarter kings, holding off opponents when leading by one score 15 times over the past three seasons - in all but two games. Football Outsiders gives us the chart below detailing Denver's successful (and less successful) Q4 defenses.

But as the saying about kings goes, uneasy lies the head that wears the crown. FO sums it up nicely, "Maybe it's a conservative John Fox philosophy, or maybe it's defensive coordinator Jack Del Rio's tactics, but the Broncos have had issues holding onto big leads. But when the game tightens up at the end, the defense has been very good, coming away with a few big interceptions or other splash plays." 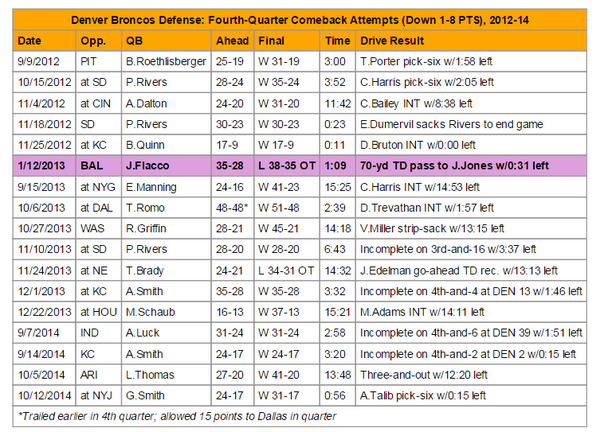 It's fair to criticize the Broncos' inability to put teams away before the 4th quarter, but it's also important to note their success doing it in the game's final minutes.

The even-better news is that, overall, the Broncos remain the most efficient team in the NFL, maintaining their position at #1 in DVOA and widening the gap between them and the next closest team. That "next closest team" has also changed; the Seattle Seahawks fell to #3, with the Baltimore Ravens moving into the runners-up slot. The Broncos maintained their #1 offensive and #2 defensive DVOA ratings as well.

On to this week's Elevated Stats, looking at the AFC West and Denver's Week 7 opponent with advanced analytics around the web.

The Broncos rank atop Football Outsiders' DVOA for the first time in 2014.

Record. Wins and losses. There isn't a more important "statistic" in football.

SOS: Strength of Schedule. The collective winning percentage of a team's opponents so far. Gathered from ESPN.

DVOA: Defense-Adjusted Value Over Average. Football Outsiders' prized statistic, DVOA, measures a team's efficiency by comparing success on every single play to a league average based on situation and opponent. It's a beast; the Seahawks and Broncos were #1 and #2 in DVOA last year. DVOA explained fully here.

PFF: ProFootballFocus Cumulative Grades. ProFootballFocus assigns a grade to every player on every play, and then accumulates those grades into a team total. I added them up, with a .022 weight for special teams (the ratio of those plays compared to offensive/defensive plays across the league), to get these scores. Check out PFF here.

The disparity between the Chargers' strength of schedule and the Broncos' is growing wider each week, as does Denver's superiority in most advanced metrics. The Broncos reclaimed the top division spot in PRD this week, and they maintain far and away the best PFF score. However, the Chargers continue to take care of the football, showing better discipline than the Broncos in the turnover department. Next Thursday's match should be intense.

The San Francisco 49ers boast the 3rd-ranked defensive DVOA behind Denver at #2, and they have a far better turnover ratio than the Broncos. That could be a recipe for disaster for Denver, who showed undisciplined play against the Jets on the road in Week 6 with 11 penalties for 101 yards - not to mention Andre Caldwell's silly kickoff return attempt. Denver needs to clean those messes up at home this week or risk failing in season-altering fashion over the next three weeks.

As always, thoughts on this series are welcome, as well as sharing more Elevated Stats in the comments.