Courtesy of 506sports.com here's a broadcast map for the Broncos/Cardinals Week 5 game. If you're in the BLUE (BLUE, not TEAL) you are in luck. Kickoff is 2:05PM MT.

Funny story. When I went to 506sports.com yesterday I saw this map... 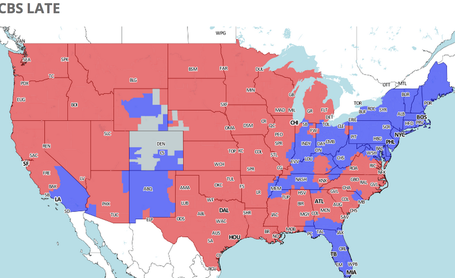 ...and thought, "What kind of nightmarish world have I entered where the Broncos game is blacked out in Denver? What the hell is going on here?"

And then I realized the Broncos game was on FOX rather than CBS this week. Whew! The world has not gone completely crazy.

If you are in the BLUE in the FOX map (at the top of this post) you WILL get the Broncos/Cardinals game on your TV this Sunday. Kickoff is at 2:05PM MT and the commentators are Joe Buck and Troy Aikman. Hawaii and Fairbanks, Alaska are also in the BLUE. The rest of that map refers to early NFL games airing on FOX on Sunday.

In case you are wondering about the CBS late map - the RED sections will get the Chiefs/49ers game and the BLUE sections will get the Jets/Chargers game.  All I will say about those games are go 49ers and Jets!! (The GREY areas won't get a late game on CBS due to silly and annoying NFL rules.)

Here's what I'm hoping to see this Sunday in the Broncos/Cardinals game:

The Broncos are 7-1-1 all-time against the Cardinals. Kickoff is scheduled for 2:05PM MT.