On Sunday, Peyton Manning threw for his 500th career touchdown against the Cardinals, becoming just the second quarterback in history to do so. Manning then proceeded to throw for three more touchdowns; below, a breakdown of all four of his touchdown passes from Week Five.

Share All sharing options for: Manning Up: #500 (and three more, just for good measure)

Last week was a bye week for Manning and the Broncos, but during their last active week, Manning threw for two touchdowns against the Seattle Seahawks. Peyton continued to show love for his tight ends, throwing, or flipping rather, his first touchdown to Julius Thomas, and throwing his second to Jacob Tamme. In the 26-20 loss, where Manning did not even get a chance to throw his third touchdown in overtime, the Broncos' QB moved within 10 touchdown passes of sole possession of Brett Favre's all-time touchdown pass record. Following Week Three, Manning was on pace for 43 touchdowns in 2014, throwing touchdowns at 2/3 of the rate that he was at the same time last season.

On Denver's first offensive possession of the day, the offense cruised down the field into the red-zone, before facing their third third-down situation of the afternoon. After already converting two-of-two on third downs on the drive, the offense dialed up another productive play, finding a way to get the ball into the end-zone. The Broncos lined up in 11-personnel, with Montee Ball as the only back, lined up beside Peyton in shotgun, and Julius Thomas as the lone tight-end, lined up in the right slot, a yard off the line-of-scrimmage. The rest of the personnel on the field included Andre Caldwell as the outside left wide receiver (on the LOS), Wes Welker in the left slot, and Emmanuel Sanders lined up wide on the right side, also on the line-of-scrimmage. Arizona lined up in a 3-3-5 nickel formation, with three defensive linemen, three linebackers, and five defensive backs. 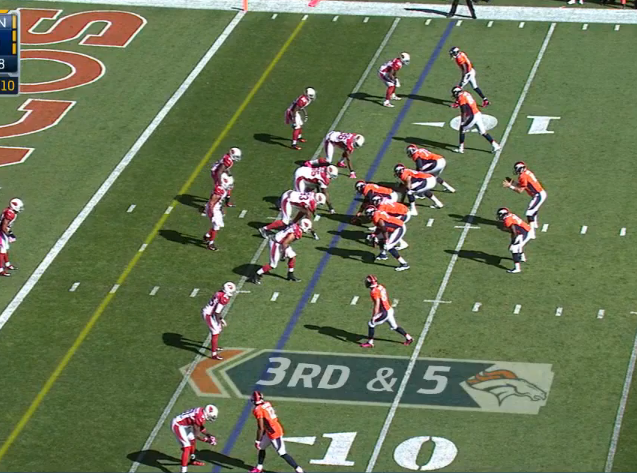 The Cardinals showed man coverage prior to the snap, and did not deviate from that, with single-man coverage on each of the four receivers. Arizona rushed five defenders, sending two linebackers on the blitz, in addition to the three down-linemen. Montee Ball, who stayed in the backfield for pass protection, picked up the blitzing linebacker, allowing Manning more time in the pocket to make the throw. Julius Thomas beat his man, safety Al Jefferson, on a corner route, and Manning hit him with a perfect throw, just out of the diving Jefferson's reach. 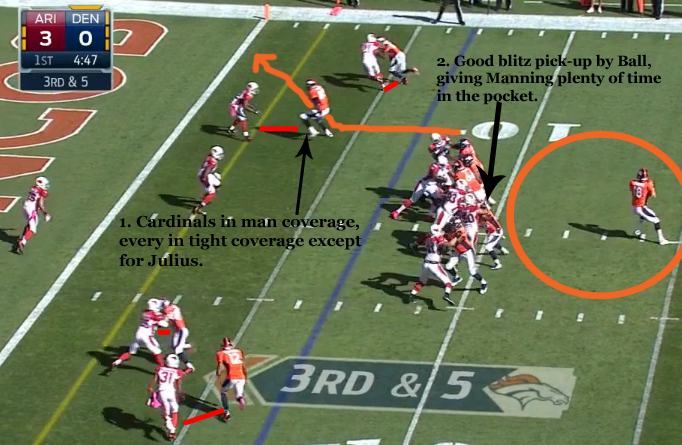 The touchdown gave Thomas his sixth on the season, and his second major record from Peyton, after having caught his record-setting 51st touchdown in a game against the Texans in 2013. More importantly, the touchdown pass was Peyton Manning's 500th of his career, which made him just the second quarterback of all-time to reach that mark. (See a complete list of the receivers who've caught Manning's TD passes here).

For Manning's second touchdown pass of the day, which almost came to Emmanuel Sanders four plays prior to this one, the Broncos lined up in 11-personnel again. Julius Thomas, the lone tight-end, was also the lone receiver on the left side, lined up on the line of scrimmage. Emmanuel Sanders lined up in the right inside slot, Wes Welker occupied the right outside slot position, and Demaryius Thomas lined up as the right wide receiver. Ronnie Hillman was the lone running back, lined up beside Manning, who was in shotgun. The Cardinals lined up in 4-2-5 nickel formation, showing man coverage, with one deep safety.

Arizona's defense sent a base rush of four defenders, dropping the two linebackers into zone coverage over the middle, and manning up on the receivers. Demaryius ran a slant route across the field, while Sanders ran a deep corner route, and Welker ran a curl route, creating a lot of open space for DT. After making the catch, Demaryius stiff-armed a defender (Cardinals linebacker O'Brien Schofield), then used his speed to bolt past three more defenders on his way to the end-zone. The play targets Cromartie's deficiency in lateral coverage with Thomas' slant route, and exposes the Cardinals man coverage on Sanders and Welker, by clearing plenty of space for Thomas once the ball is caught.

More 11-personnel on Manning's third touchdown pass of the day, with Julius Thomas lining up in a three-point stance on the right side of the line, while Montee Ball lined up as the lone back, to the right of Manning, in shotgun. Demaryius and Sanders were the left and right outside wide receivers respectively, while Wes Welker lined up in the left slot. Arizona's defense came out in a 4-2-5 nickel defense again, with one safety playing in a linebacker-type role, and the other safety deep.

The Cardinals again rushed four, with man coverage on Demaryius, Sanders, and Welker, zone coverage over the middle with the strong safety and two linebackers, and support over the top from the free safety.

Demaryius Thomas ran a go route against man coverage by Antonio Cromartie. At the time the ball was released from Manning's hand, Cromartie appeared to have Thomas in check; however, the pass dropped right into Thomas' hands as he was in full stride. Thomas caught the ball and beat the safety, who at that point had taken a poor route to the ball and was too far inside to catch the Broncos receiver, on his way to his second score of the day.

On Sunday, Peyton threw for 4 touchdowns in a single game for the 32nd time in his career and the 10th time with the Broncos, but it was the second time he's thrown four touchdowns, all to someone with the last name 'Thomas' (Week 16 in 2013, vs. Chargers). The fourth touchdown was the fourth that was thrown in 11-personnel, with Julius Thomas lined up as the right wide receiver, Juwan Thompson as the solo running back, Demaryius wide left, Welker outside left slot, and Sanders inside left slot. The Cardinals came out in a 3-3-5 nickel formation, with four DBs in man coverage on the Broncos' four receivers, and one deep safety. Arizona showed blitz, making it look as though they were going to send the entire box on a blitz.

The Cardinals rush three linemen and one linebacker, leaving man coverage on all four Broncos receivers, and dropping two linebackers into short hook zones over the middle. Welker was open on the 5-yard out pattern that he so often reels in, but Manning never takes his eyes off Julius, finding a favorable match-up against Jefferson, who he already beat earlier in the game. Manning knows the deep safety is too far over to cut off the route Julius is on; he throws the ball to a spot in the end-zone and lets Julius beat his coverage and go get it. Jefferson is too occupied with Thomas to get his head around, and by the time he does, the ball is already in Julius' hands.

Julius' second touchdown of the day was his seventh on the season, putting him on pace for 28 this season. The record for single-season touchdown receptions by a tight-end was set in 2011 by Rob Gronkowski, when he caught 17. Thomas is well on his way to smashing the record, and most definitely will, unless defenses clue in on how to stop the versatile tight-end in the red-zone.

Four touchdown passes to Thomases later, and Manning needs just six more to break Favre's all-time touchdown record, and just five more to tie it. Peyton has thrown for five or more touchdowns eight times in his career, and could possibly do so against a Jets defense that allowed 31 points against Philip Rivers and the Chargers last week; however, he's much more likely to break the record against the Niners in Week Seven, as most of the readers on MHR predicted.

Peyton has upped the rate at which he's throwing touchdowns to exactly three per game, and 0.75 TD passes per quarter. If he continues that pace, he'll surpass Favre's record in the fourth quarter of the Week Seven game against the 49ers. Additionally, if Peyton continues his current touchdown pace, he'll come up seven touchdowns short of his record 55 in 2013; through four games last season, Manning had already thrown for 16 touchdown passes, or 4.0 per game. In order to surpass his single-season record from 2013, Peyton must now throw for 3.67 TD passes per game for the remainder of the season.