Get to know the newest staff member of MHR, Kelly Fleming! 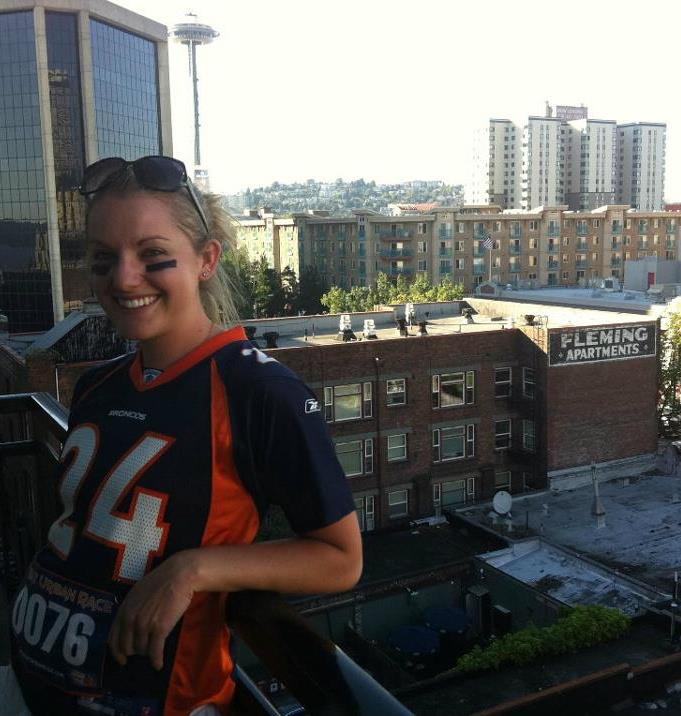 Bio: My obsession with the Broncos started when I was in the womb. Literally- the Broncos played in Super Bowl XXII while my mom was pregnant with me. My parents dressed me in Broncos gear as an infant, and I willingly wore it throughout my childhood.  By the time I was 10 and the Broncos were in Super Bowl XXXII I was borderline obsessive. I clipped every newspaper article about the Broncos and hung it on my bedroom wall until it was completely covered. I had a Broncos comforter, Broncos socks, A Broncos Starter jacket (90s nostalgia), and I might have literally bled orange and blue. I have collected 7 Broncos jerseys since this time, and I still proudly rock my Davis, Elway, and McCaffrey jerseys that I have had for 15 years.

Two of my most awesome Broncos memories both involve Terrell Davis. The first was the Super Bowl XXXIII parade, I swear as I was screaming and waving TD made eye contact with me and smiled and waved back. The next one was when I was about 12 or 13, we went to a softball game that professional athletes from Colorado teams played in where ticket proceeds went to charity. I had seats behind home plate with a bunch of my friends and we started chanting "Here we go TD, here we go!" as he was up at bat. He stepped out of the box and turned around and gave us that awesome big smile of his. And as I am writing this I'm realizing that when the batter is up the crowd is supposed to be quiet. Oops.

Football was always my favorite sport. As a kid I would watch games with my dad and quiz him on the rules.  I played it every day at recess in elementary school. Back then I was one of the tallest kids in the class so I always played wide receiver, and I was good at it. I was convinced that the NFL was my calling and I would be just like Ed McCaffrey... clearly that worked out well for me as a 5'5" puny female. Although my career path may not have worked out that way, I did recently buy a blue car and name it Eddie Mac, so that's pretty close I guess.

What I actually did end up doing for a career is something I am equally as passionate about as the Broncos. My goals have always been to make a positive difference in the world. As someone who was always curious, loved math and chemistry, and loved the outdoors, I decided to be a chemical engineer and try to solve the energy problem. I got my undergraduate degree from the Colorado School of Mines in 2010 (go Orediggers! - why don't they have an SB Nation Page?). I decided to go to graduate school to continue renewable energy research, and I am currently a student at the University of Washington in Seattle. Yes, the home of the Seahawks. If you're curious about how that makes me feel, I wrote a story about why I dressed as a Seahawks fan for Halloween, which ultimately got me the MHR gig!

When I graduate next year, I hope to be able to spread the word about science and energy as a science communicator. I currently run a blog called Gray Matter Happy Hour, which relates science to every day issues. If you're interested please take a look. Your feedback for all of my writing is welcome and encouraged!

Although it may not have turned out the way I thought, this was so fun to write. I love breaking apart stats that aren't obvious when watching the game. I still think it's fascinating that Montee Ball is so impressive at dragging around 300 pound linemen. I hope Montee eventually shows his strengths, although C.J. Anderson has broken out as an amazing running back since we have gotten to see him play against teams that are better than the Raiders.

It is terrifying what sugar does to the human brain. Just say no the that second slice of pie!