Armchair Coordinator: For Peyton Manning it's a numbers game

Uncanny. That's the only word I could come up with to describe the way Peyton Manning finds and exploits the weakness in a defense. That's the fan in me talking. To opposing defenses, the word is "unfair"

Share All sharing options for: Armchair Coordinator: For Peyton Manning it's a numbers game

We thought we had a good one. After studying film, we had this one blitz our coaches drew up that we thought we could drop in. We'd essentially send our whole left side of the defense at him. He wouldn't see it coming. Well, somehow he did. Nobody jumped or gave any indication we were blitzing. Then right before the play, Peyton checked and threw a quick pass to the left side. Big gain, first down. We weren't even showing the blitz! I have no idea how he knew.

With Peyton it's a numbers game. How many are in the box? Do I have man coverage on the outside? Is the blitzer going to leave my receiver wide open against a soft zone? It's about seeing the field and throwing to the open space. 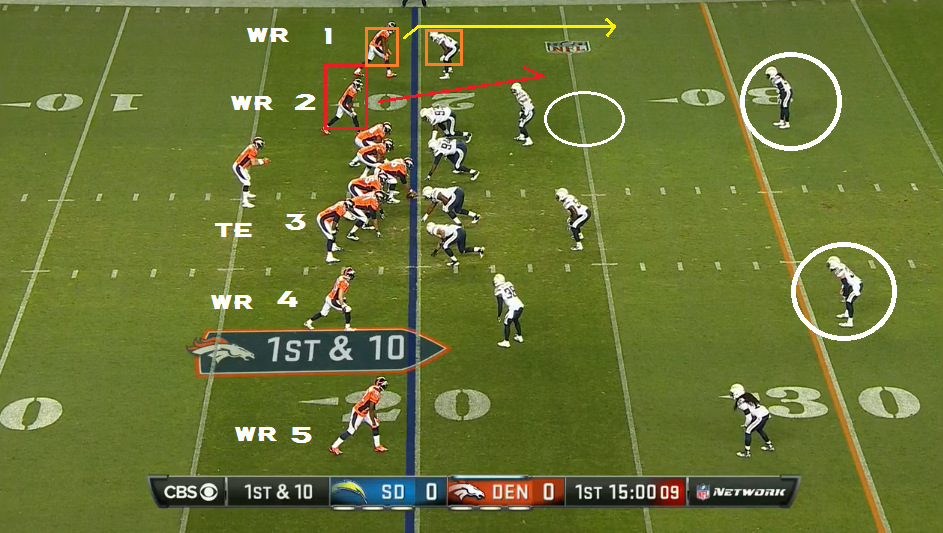 You can use your own pieces to create soft spots in the defense or even make the defense reveal their intentions. The Broncos rarely use a true 4-WR. DT, Sanders, Caldwell, Welker, four wides on the field, with Welker and Sanders in double slot. The one on one matchup on the outside (orange) will clear out the flat and leave Emmanuel Sanders open against a soft zone. Sanders finds the spot in the zone, breaks off his route, and turns a short gain into a first down with a missed tackle. It's a numbers game. Peyton can see the physical cue of the playside linebacker and know that he has a mismatch regardless if the linebacker is playing man or zone.

It might not always make sense to you at home, but that's because you're not Peyton Manning 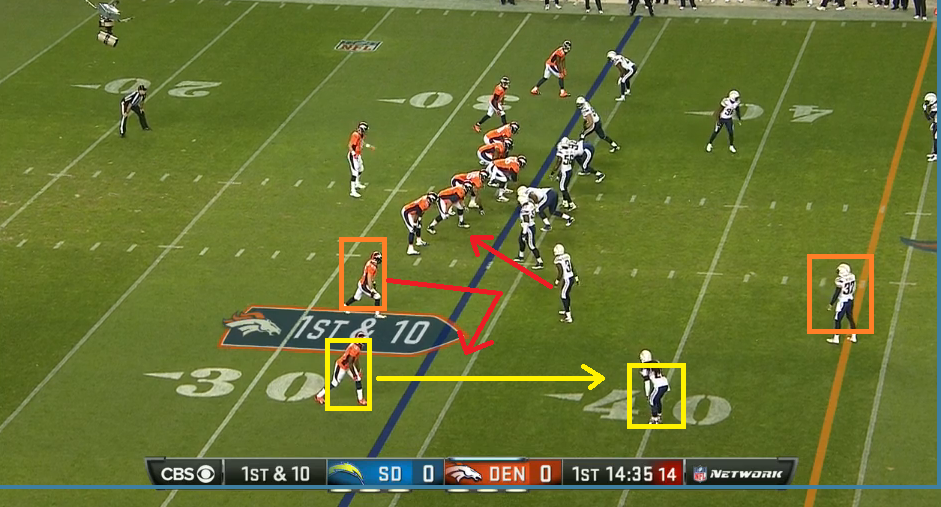 Looks like Cover 2 but it isn't. This is man free with Weddle having coverage responsibilities on Wes Welker in the slot. Manning sees the blitzer a mile away and knows Wes' quick out will be wide open after the outside receiver clears out his man. These two man combo routes are a staple in the Manning passing game. Weddle does a nice job of recognizing the concept and makes the stop. This is still the correct throw to make against this defense.

It's a numbers game....one on one equals winning

Sometimes you have to manufacture your one on one opportunities. In this case, Manning sees how close the safeties are playing to the line of scrimmage. He is under center and they are expecting a run. The playside Safety creeps up and is held momentarily by the fake handoff. When the corner backs off his coverage it tells Manning that more than likely he has no safety help over the top.

One more cue lets Manning know that Sanders post route can beat this coverage. The corner is showing outside leverage. This means Sanders can win to the inside without much effort at all. 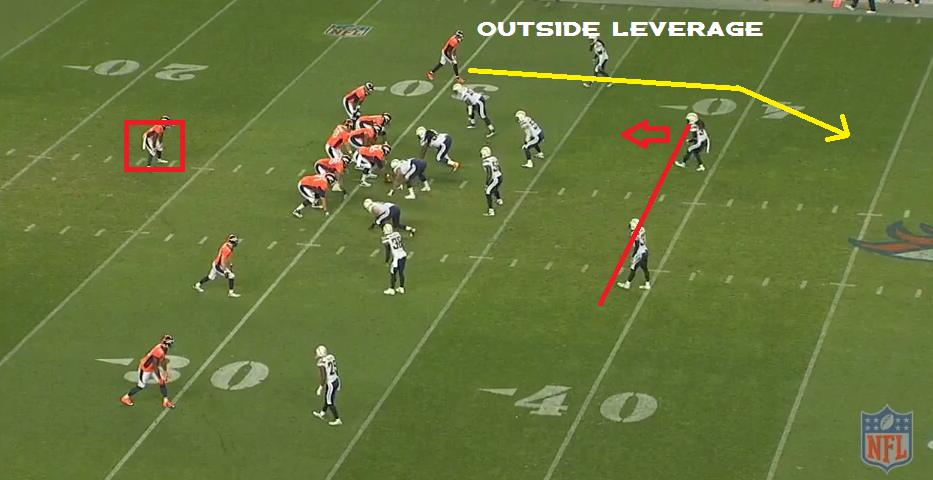 It's a numbers game...and sometimes the numbers tell a lie

I see 3 on 4 right? Wrong. Our goal is one on one....and here's how this playcall accomplishes that. 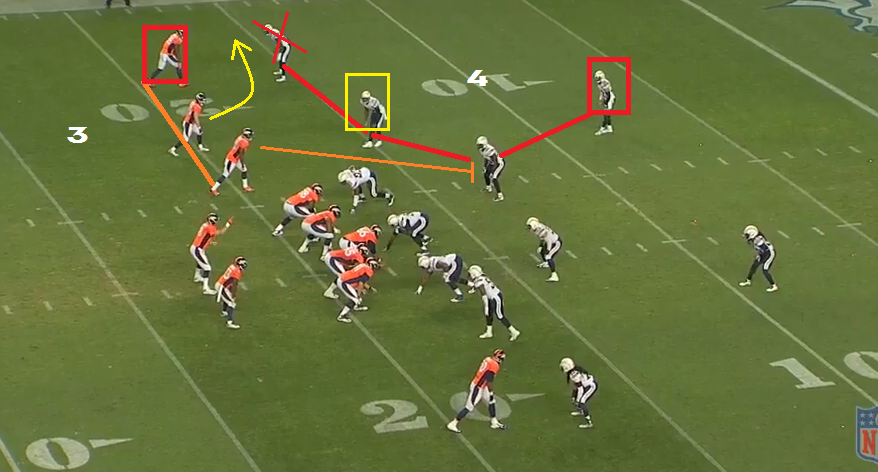 Demaryius has a one on one with a safety in the open field....WINNING

No one throws a prettier ball than Peyton when nailing this route. It's simple--a numbers game remember? One on one, up the sideline, hold the single deep safety momentarily with your eyes, then unleash the ball to a spot to the outside shoulder. This play is like watching a masterpiece in motion. I'm willing to bet Peyton Manning has thrown more touchdown passes as a Bronco utilizing this concept than any other in the playbook. 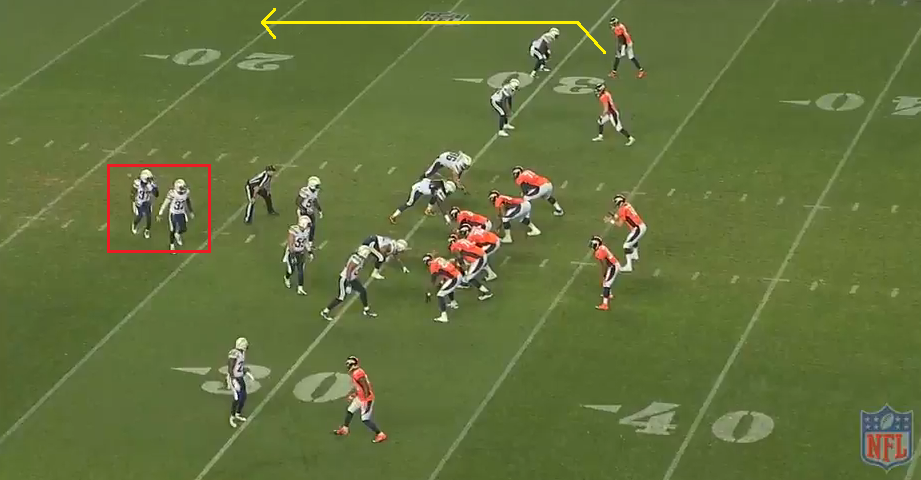 San Diego plays a lot of man coverage. It always leaves the outside receivers with a one on one so long as Peyton can manipulate or hold that safety momentarily.

Watch how he keeps his eyes to the left before opening the surprise.

Manning has been asked about his pre-snap process and almost every time he offers a response, he says something along the lines of "I am trying to eliminate what the defense isn't going to do." In other words he's reading cues and using his experience to eliminate possibilities.

As you watch the game this Sunday, play the numbers game. Try to identify the one on one's. Read the box count, try to figure out if there will be one or two safties up top and from there try to diagnose the coverage underneath. Read cues--know if that post or go will be there because the corner has inside or outside leverage, and read the body language of the slot DB or linebacker close to the ball--are they blitzing?

Remember, for Peyton it's all about getting the ball to the playmaker who will have the least resistance. Many times that means he will trust his receivers to win their one on one battles. Other times, the call will be designed to create those opportunities for his playmakers.

So how do you stop Peyton?

Good luck San Diego. So far you're 1-5. Perhaps a San Diego defense is precisely what the doctor ordered for a so-called slump.

H/T to SI.com and the Brandon Flowers column this week about facing Peyton Manning. All quotes are directly from him.