It's the most boring time of the year! Fortunately, it looks like we're going to start a thorough roster review here on MHR prior to the beginning of free agency next month, which should help pass the time.
New to Mile High Report? Sign up here and join the discussion!

Share All sharing options for: Six Pack: Denver Broncos free agents want to stay, but also want to get paid

Yeah, that was about my reaction to Michael Sam becoming the first openly gay player in the NFL. I mean, I hate to be sarcastic about it, but I live in California and being gay is about as unusual as being left handed. Then to have it be such a huge nation-breaking story is just flabbergasting to me. Apparently, NFL locker rooms are about as progressive as China during the Great Leap Forward.

RT @mikefreemanNFL: One veteran player on Sam: "Half of the NFL's locker rooms will accept him and half won't. It's a roll of the dice…"

2. Players want to stay and get paid

Knowshon Moreno's agent has priced his client at $4 million a year, which is almost twice what he should get. Perhaps there is room for negotiation there.

Eric Decker, however, is going to likely command a much higher price tag. It also certainly sounds like Decker is already mentally preparing himself for departure from the city of Denver.

I would love to come back. I don't know my future, either.

This will be a new daily feature for me. Using this mock draft simulator tool, I'll conduct a seven round redraft every day provided there isn't some more important news going on that is more deserving to be in the six pack.

The mock fell badly for what I feel are the Denver Broncos biggest needs, which are ILB, S and G in that order. However, I made up for it by drafting two Inside Linebackers in later rounds, which also picking up an interesting option at quarterback in Zach Mettenberger and some potential players at the end of the draft. 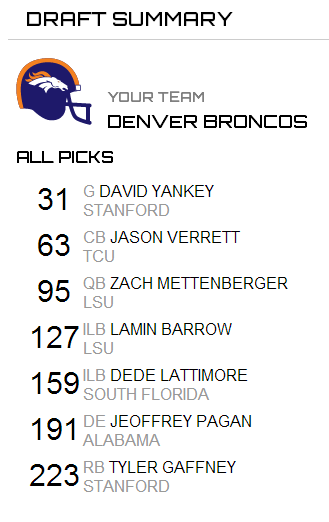 But not as bad as Mel Kiper and Todd McShay. Apparently, even if the Browns had followed the advice of the best mock drafters in the business, they would have failed. Honestly, I think both Kiper and McShay purposely mock players they know to be busts to the Browns for the simple reason that the busts have to go to one of four franchises. The Cleveland Browns, Oakland Raiders, New York Jets, or Washington Redskins. That is just my own personal suspicion, of course.

Looking back brought me to Floyd "The Franchise" Little today. He was the King of Denver long before John Elway came to town. When you call yourself a Broncomaniac, you can thank this man for making it happen.