We've got some 2013 offensive grades out. How would you grade each offensive player for their overall performance during the 2013 NFL season?
New to Mile High Report? Sign up here and join the discussion!

Share All sharing options for: Six Pack: The Denver Broncos grade out pretty well overall for 2013

Jeff Legwold over at ESPN put out his 2013 Report Card for the Denver Broncos offense last season. As a Broncomaniac homer, I felt he was particularly harsh on his grading system, but maybe he is still feeling the sting of that Super Bowl blowout.

Who gets an A?

I guess I can agree with most of that, except for Beadles. I felt he was a major weak link in protection and if it wasn't for Manning's quick release he would have graded out even worse than he did through ProFootballFocus.

I felt a bit of pride when I read that Forbes Magazine felt that the Denver Broncos were one of five teams in the National Football League that have a culture that can accept a gay football player in their locker rooms.

Even if you hold an unfavorable opinion of the gay lifestyle, it should still make you feel good that the Broncos are so highly regarded for their professionalism and class. Just another reason for us to know that we lucked out in picking the Denver Broncos as our favorite team.

Oh and does anyone know what to make of this tweet? It confused me. Does it mean that if I claim to be gay I could get a raise at work? I do need a raise...

Congratulations to Michael Sam for capitalizing on the most perfect marketing campaign ever seen before an NFL Draft. Gay = support = $$$$

3. Back on the Clock

Some of you were not impressed with my quarterback selection on Day 2 on yesterdays mock draft simulation, so I decided to focus more on getting value at positions of great need this time around. Then something strange happened, Johnny Manziel fell to my first round pick and I went all Josh McDaniels.

Then when Tre Mason fell to me in the second round, it was like I was in full Jimmy Johnson mode in 1990. I just couldn't help myself. I really do feel like I just drafted a dynasty here, okay? Deal with it. 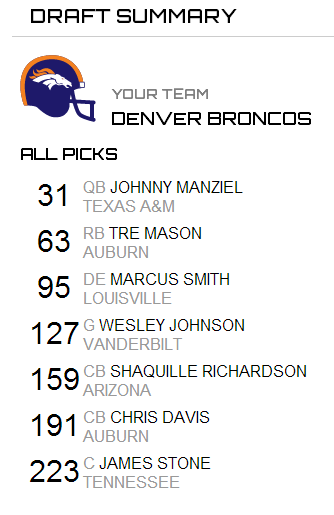 4. August, where for art thou?

So this guy posted a video over in the FanPosts that I thought looked pretty cool, but it turned out to be something I vehemently disagreed with.

First he removed John Elway as the reason the Denver Broncos won Super Bowls in 1997 and 1998, which I could actually agree with. Why? Because Terrell Davis was the catalyst to those Super Bowl championships, not John Elway and certainly not Mike Shanahan.

He then went on to argue that it wasn't Terrell Davis either because of all of these other 1000 yard running backs Mike Shanahan's system produced. Yeah, none of those guys produced like Terrell Davis produced. None of those other guys ran roughshod over the entire NFL and through seven 100 yard performances in a row in the playoffs.

Mike Shanahan was the perfect coach for that football team, but he would spend the next decade withering away into obscurity. What has Shanahan done since? Got fired after a failed tenure in Washington,

I do like Mike Shanahan the coach. I just don't worship at his alter. Ever.