A Look At the Broncos Offense Through History

Share All sharing options for: A Look At the Broncos Offense Through History

The off-season has begun which means a time for reflection on the strengths and weaknesses of the past season. Today I want to study how the 2013 Denver Broncos offense compared to past Broncos seasons. We'll do this by looking at each previous year in two ways:

Now remember overall this isn't the most in depth study, instead it's a quick look at the trends throughout their years.

How the Broncos Have Moved the Ball Historically

So we'll look at this idea in a number of ways, here is how the table will be formatted:

These categories are pretty self-explanatory, they just tell us how often and how successfully teams passed and ran the ball. But there are two other sections I included.

By looking at this we can see the ratio of how often teams ran and passed the ball. So for example you have a very simplified team:

Team A has a pass/run attempt ratio of 40/30 or 1.33 pass attempts for every 1 run attempt. They had a pass/run yard ratio of 300/150 or 2 passing yards for every rushing yard. This gives a real image of how often a team runs and passes the ball, the higher the ratio, the more often they passed it compared to running it, but if the ratio drops below 1, they actually ran it more times than they passed it. To put this in context for a real team, in 1983 Reeves was the head coach, they passed the ball 499 times and ran it 471 times, so they have a ratio of 1.06 passes per run. But another factor recorded here is the yards, we see they had 3466 passing yards and 1784 rushing yards, so that would be a ratio of 1.94 passing yards to 1 rushing yard. That means that passing was 94% more often used to move the ball than running was that season. Whereas in 2003, the team had a yardage ratio of 1.13 passing yards to 1 rushing yard, a more even balance of moving the ball.

*This is a sortable table, click on the heading to sort*

How the Broncos Scored Historically

This section and table will follow a similar format, but will deal with scoring:

As with how we studied the Broncos offense in relation to yards, this lets us see how often they passed and ran the ball into the end zone. similarly to last time by including the ratio, we can see how balanced a team was in the red zone. 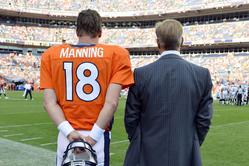 Now obviously there are other factors at play here, but this gives us a feel for how each season went and what parts of the team worked effectively.

*This is a sortable table, click on the heading to sort*

The Broncos have changed with each coach, Reeves using a pass heavy offense (even if we don't remember it that way), Shanahan and Phillips running more balanced offenses, and McDaniels returning to the pass heavy offense and Fox using both at times. But even within each coach's tenure there was fluctuation, as players come and go, injuries set in, teams have to change.

Fox's offenses, especially in 2013, were a bit hard to read because while their ratio was horrible, they had 16 rushing touchdowns (which is above average when compared to past Broncos seasons) and had a rushing touchdown percentage which was also above average, though his 2012 season was pretty below average in those two areas.