Six Pack: Denver Broncos free agents won't be shown the money and neither will Terrance Knighton

With Terrance Knighton wanting a big payday, it probably isn't going to happen in Denver. John Elway isn't known for shelling out big money for non-quarterbacks, so Knighton is just going to have to string together two consecutive awesome seasons.
New to Mile High Report? Sign up here and join the discussion!

Share All sharing options for: Six Pack: Denver Broncos free agents won't be shown the money and neither will Terrance Knighton

It's the defenses turn to be graded by Jeff Legwold over at ESPN. The Denver Broncos defense had a pretty rocky year, but I am sure we can all agree that was largely due to massive injuries at nearly every position. That they were even competitive during the final stretch of the season was impressive in of itself.

Who gets an A?

It's hard to argue these grades other than Legwold's obvious swing and miss on DRC. Rodger-Cromartie was lights out the entire season, so how he only holds a B grade is shocking considering he was also rated by ProFootballFocus as one of the best cornerbacks in the league this season.

So Terrance Knighton feels he needs to be paid before he plays again, even with time remaining on his contract. If I were John Elway, I would be quite content just to let him hold out if need be.

RT @BKDenverSports: A source close to Terrance Knighton told me he & his reps feel he's outperformed his contract & seeks a new deal

I don't know why people are mad at me. All I do is play football. The business part is controlled by my agent.

Given how Elway is structuring this franchise, he is aiming for short term contracts with high turnover each season. Knighton is slated to have the third highest salary cap figure on the defensive side of the ball for 2014, behind only Champ Bailey and Von Miller, at $2.75 million. I would agree that he is among the top 3 players on defense.

Move over Al Davis, Jimmy Haslam is the worst professional sports owner in all of history. Yes. He is. After team President Joe Banner and General Manager Michael Lombardi embarrassed him with the firing of Rob Chudzinski and subsequent media circus of being unable to find a new coach, Haslam fired both of them. All I can do is laugh at him, and cry for the hardcore Cleveland Browns fans suffering through this. In fact, any one of them could have run this team better over the past six years.

I picked up an All Madden dream team yesterday, but its time to get back to basics today. The Denver Broncos have a lot of needs and I intend to fill them in this mock draft simulation. I went defense at first and found myself a solid coverage inside linebacker, so no more tight ends burning the Broncos down the middle of the field. Overall, I am very pleased with today's mock. 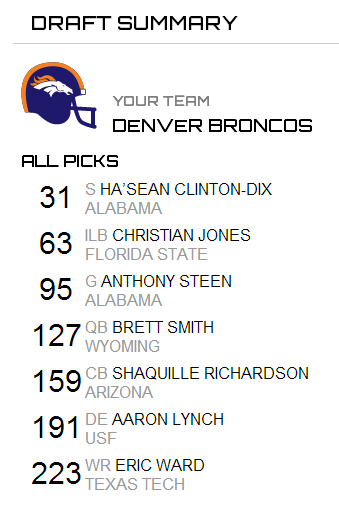 With Eric Decker an unrestricted free agent this offseason, we could have seen the first and last season of The Four Horsemen. They had a pretty good season too.