Six Pack: John Elway and the Denver Broncos extend their match made in heaven

Extending John Elway's contract several more years was a great sign for us Broncos fans as there is no one better qualified to build a team to represent what we all think our favorite team should represent. Hopefully, it leads to a non-Super Bowl blowout.
New to Mile High Report? Sign up here and join the discussion!

Share All sharing options for: Six Pack: John Elway and the Denver Broncos extend their match made in heaven

The Denver Broncos made the biggest no brainer decision of the year by extending John Elway's contract through 2017. Under his leadership, the Broncos have won three consecutive AFC West Division titles with three different starting quarterbacks. The Broncos are averaging about 12 wins and four losses a year, which is easily among the NFL's best.

Jon Heath reported the rumor about some new uniform prototype out there for the Broncos and all I have to say is NO. Whoever designed this uniform needs to find a new career path or go back to being an Oakland Raiders fan, because they obviously hate the Broncos.

In case you missed it, Richie Incognito went off on Twitter towards Jonathan Martin. I was going to embed all of the tweets here, but I can't imagine any moron advising him won't be advising him to immediately delete all of those tweets.

I have grand designs for his tweets too, so I decided to make them all images. He is NOT going to ruin my fun this morning! So let's watch this soap opera unfold shall we?

Get yo popcorn ready! This is getting good! I wonder what idiotic thing he will say for all the world to see next? 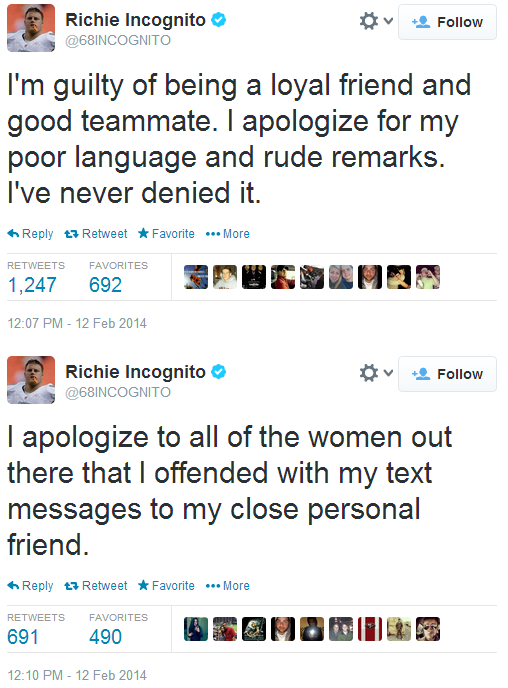 Wait, what? Have another drink Richie, you are in that in between area where you are just drunk enough not to make sense and not drunk enough to be interesting again. 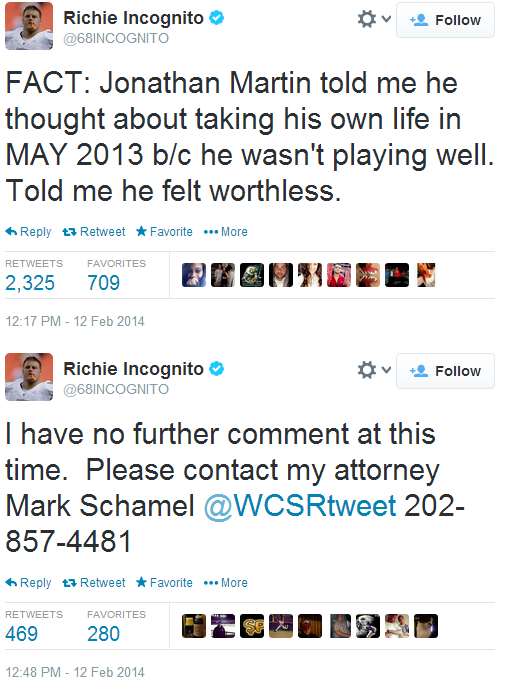 No! You just dropped a bombshell. I'm going to call your lawyer just to yell at him for giving you good advice. Stupid lawyers.

Another day, another mock draft simulation. This time I went 100% with the Best Player Available according to their draft board. I did this only to show how stupid exercising pure BPA actually is. It worked ... mostly. 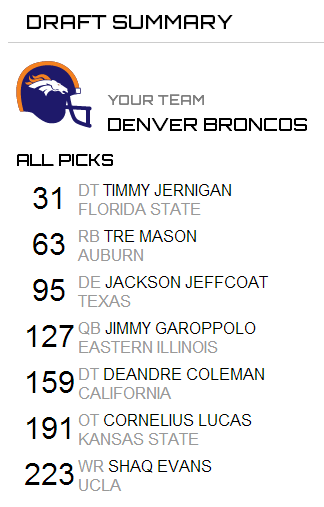 With Elway's extension, I had to honor him with my greatest childhood memory as a Denver Broncos fans. I was a wee lad of 12 or so when he shocked me with two of the most impossible plays I've ever seen (until Tim Tebow anyway).