The Broncos have the second hardest schedule in 2014, but that's what happens when the two best divisions in football in 2013 face each other the following year.

1. The NFL Has Manning Figured Out

Richard Sherman just can't stop from flapping his mouth to anyone with a camera, so the latest now is apparently players from around the league helped him figure out Peyton Manning's hand signals. I guess my question is, how does Manning win any game at all? The guy is so predictable.

Many people might complain about not having a tough strength of schedule, but I relish this. The Denver Broncos will have the second toughest road to the playoffs of any team in the NFL. The poor Oakland Raiders have it the worst, but I suspect that is only because they don't have to play themselves twice a year.

The key for me will be to see how well the Broncos match up physically against those NFC West teams. After that Super Bowl catastrophe, I'll be angling for a 4-0 record against those teams before I start to relax heading into next seasons playoffs. Yes, playoffs ... when was the last time Peyton wasn't in the tournament as a starting quarterback?

3. Montee Ball is a Gamer

I'm going to play a huge role in next year's success and I'm really looking forward to it. -Montee Ball via Denver Post

With Knowshon Moreno's future up in the air, Montee Ball is ready for the reps and the increased roll in the offense. Ball came on strong late in the season with 393 yards rushing from Week 13 on for 5.4 yards per carry. Not bad for the number 2 role.

If you watch the video of Terrell Davis in the link above, he put Ball at #5 on his list of running backs to watch for a break out season in 2014.

I was expecting this mock draft simulator to get old after a while, but it keeps spitting out different options each time I go to use it, so I keep using it!

After arguing a bit about defensive tackle in the MHR round table set to publish today, I was convinced to go big and ugly up front. Then from there, I did my best to fill needs at key positions. 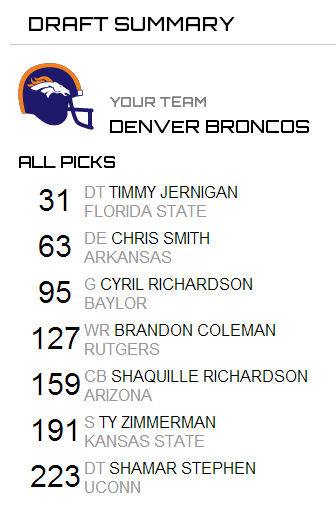 Oh boy, the new Sports Illustrated Swimsuit Cover was revealed yesterday. I must say, it's butt-rific!