Ever since it was announced that the new Met Life Stadium in New Jersey would host Super Bowl XLVIII there has been a lot of talk about whether or not a Super Bowl should be played in the cold weather. Well it looks like we won't find out that answer tonight as the temperatures are looking down right balmy for the Northeast in early February. 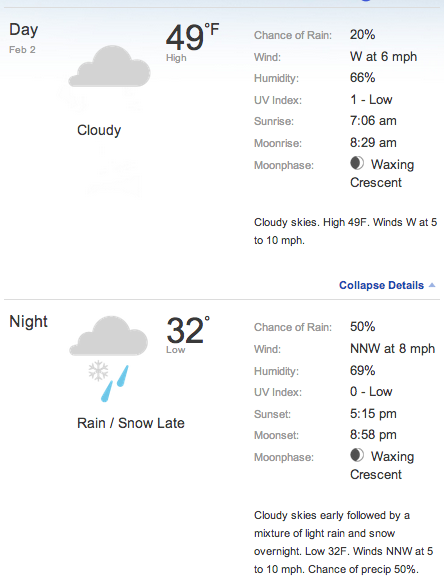 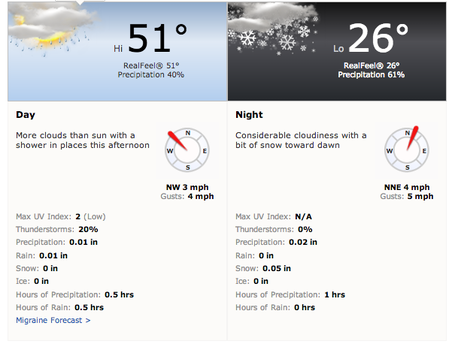 These forecasts are pretty similar. Both are predicting temperatures to be near or above 50 degrees for day time highs, and lows near or a little below the freezing mark. However with kickoff around 6:30pm EST, the temperatures should be above 40 degrees. There's a slight chance for precipitation at night, but it appears that will hold off until after midnight.

Lets take a look at the hourly forecast for Sunday evening 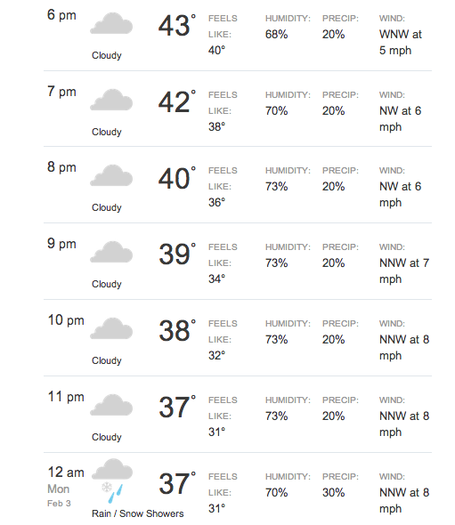 The coldest Super Bowl on record is Super Bowl XI with a kickoff temperature of 39 degrees. If the forecast holds true, Super Bowl XI will continue to hold that record. It appears the temperatures will be in the low to mid 40's at kickoff. The temperatures were never a big issue anyways. What is more important is whether or not it will snow or rain, and if the wind will be a factor. There's only a 20% of precip from 6pm to 11pm, with a 30% of Rain/Snow Showers at midnight. The wind won't be a factor either. They're only calling for wind speeds of 5 to 10 mph. So after all that hype and endless talk about the weather, it will not have an effect on the game at all.

These weather forecasts are a huge plus for the Denver Broncos offense. Peyton Manning and company couldn't have asked for a more better forecast. Warm temperatures, no rain or snow, and little wind is perfect. So Peyton shouldn't have no trouble picking apart this Seattle Seahawks secondary.

"Some days we have better winter days than some people have in spring," Broncos cornerback Champ Bailey said.

Happy Super Bowl Sunday too all of you, and GO BRONCOS!!!!