Last off-season I scouted a number of players entering their 4th, 5th and 6th seasons. It was popular, so I wanted to continue this series during the 2014 off-season. Many of these players are commonly discussed, but we too often misunderstand what type of players they are now. While few players make big strides in years 1-3, by a players 4th year they should have progressed in a number of areas. With that mentality I wanted to approach my study of these players like an NFL scout would a rookie, looking back on the most recent season's game film and then write up a scouting report. By doing this I feel the Broncos fan base can create a more up-to-date picture of what these players strengths and weaknesses are instead of relying on what we remember from their early careers.

I'm going to be using the CBS Sports player profile outline since it's so robust and even used by NFL.com now. They break the players skills into a variety of categories and then give them a score for that category by looking at every snap they play. For each player I'll try and do my scouting with either a member of an NFL team staff or a someone from a reputed scouting site. Our method is straightforward with me watching every game and snap while my partner does this separately. Then at a later date we watch two to four games together and compare notes. Following this session we assign a score. For example the average NFL starter at any position will be a 7 so a 9 would be around Pro Bowl level while an 8 is above average. A 6 is an area of concern while a 5 is likely reason to be benched. This is a methodology I started two years ago and which I first used last off-season whiling working on perfecting it during these past few years.

For this study I was extremely blessed to work with Pro Bowler turned coach Al Harris of the Kansas City Chiefs where he is an assistant defensive back coach. This is not his scouting report since that would be inappropriate but he did assist me in my film study.

*This isn't a predictor of future success, it's an assessment of their ability currently, it's how they performed in 2013.*

Roundtable: What to do with Champ Bailey?

Scouting the Broncos vets: David Bruton Roundtable: What to do with Champ Bailey?

Athletic Ability: Moore lacks elite speed, strength and size but still possesses reliable talent in those areas. Rahim has solid acceleration, but isn't a decisive defender and rarely reaches his top speed even if he's chasing down a receiver who beat him. It's hard to judge his speed because you expect he can run faster but so often he just doesn't.  In terms of physicality and strength, Moore doesn't tend to shy away from contact but, largely due to his small size, he isn't always effective. Has decent arm and leg strength when he's able to get his arms around the defender he can have success.
- GRADE: 7.3

Football Sense: Moore lacks that knack of elite safeties who are able to read, diagnose and then attack an offense, often times knowing before the snap what is going to happen. Having said that his strength comes from playing within the scheme, the coaches aren't able to have him on the field and make his own decisions, rather he's at his best in a tight, rigid system. You give Moore a zone to cover, he seems to know the exact measurements of that zone, down to the yard, and will cover that area to the best of his ability. Now this isn't a measure of his success in zone or man coverage, rather it's a statement that while he may not be the most cerebral safety, he can still succeed when given clear coverage goals.
- GRADE: 7.0

Read & React: Possibly the biggest weakness in Rahim Moore's game, being able to read and react to what the offense is doing, isn't one of his strong suits. More often than I care to admit Coach Harris kept pointing out how the receivers were only running 5-7 yard routes but Moore kept dropping further and further back. Often times this is a sign of a safety who would rather drop back instead of stepping into the play, we aren't saying he should leave his zone, just don't be afraid to prepare. It's a sign a player is overly safe and may be playing scared. This is even more obvious when zones break down, instead of moving to cover the open receiver in his zone, he'll drop back further. To examine this a bit more, let's take a look at the good and bad of Rahim Moore.

So let's first glance at the good he can do. In week 1 against Baltimore, on a 3rd and 8, Joe Flacco looks for his tight end Dallas Clark, Moore is already in a more shallow coverage than he's used to which greatly helps him break up this play. 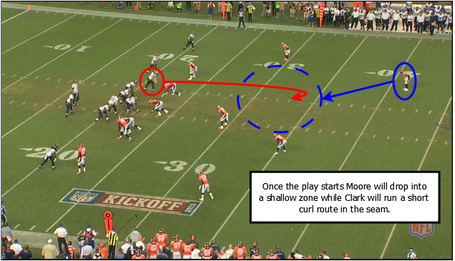 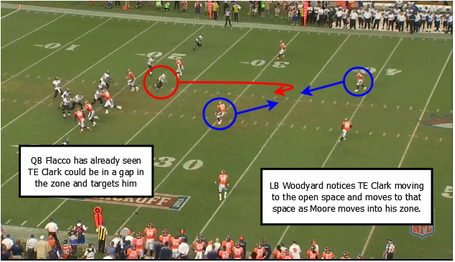 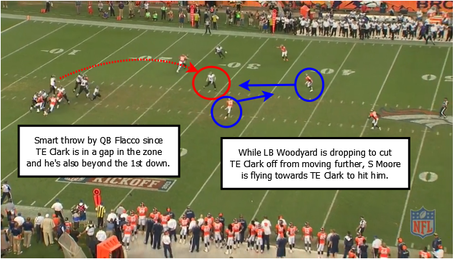 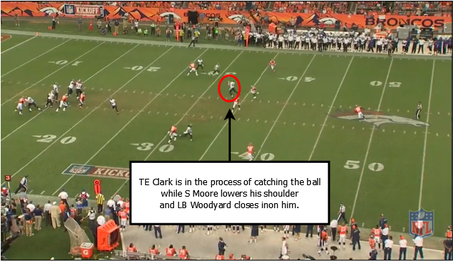 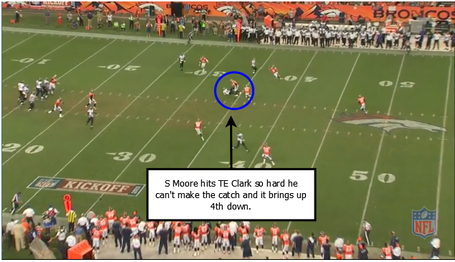 But sadly those didn't happen as often as we'd hope, let's take a look at when Moore made a mistake and it cost the team. Against the Raiders Moore's biggest issue was exposed, biting on the initial play read, which in this case is a trick play. 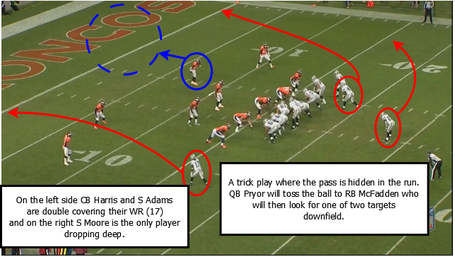 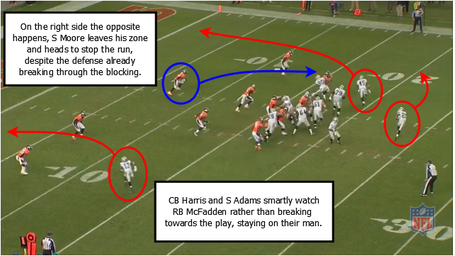 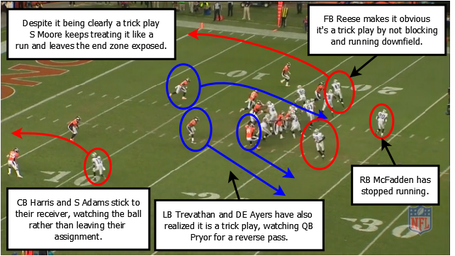 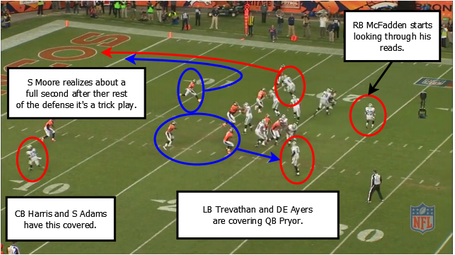 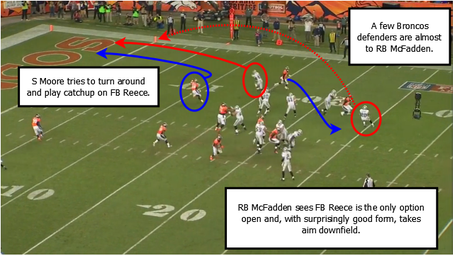 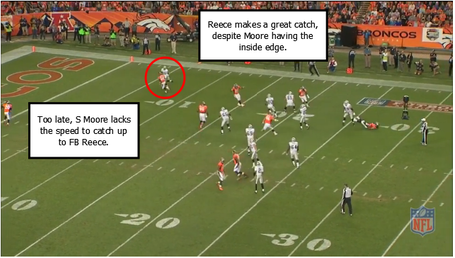 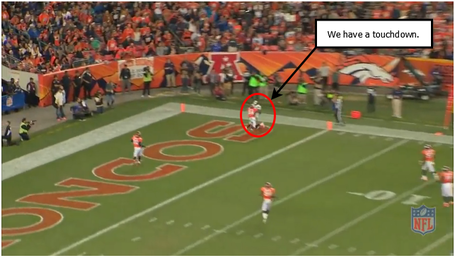 Man Coverage: This was the area I was most surprised by, I initially thought this was a weakness of Moore's, but after our film study I walked away thinking much higher of him. Now he's hardly great, but played better than I expected. Moore is an aggressive defender while in man coverage, this has it's pros and it's cons, right away quarterbacks know they have a safety in man coverage, but it's nice since he's able to get physical with who he is covering early and stay on them. Now he can tend to take this a bit far, bordering on pass interference, and against stronger players he's easily shrugged off, leaving the receiver open. Also when he plays physical early on, it can lead to him losing his footing or balance and just getting pushed around. When he's beat the most in man coverage, it's because he got beat physically. With that out of the way though, let me comment on one of Moore's greatest assets in this area, his fluid hips and quick back step, because when he does play off his man, he's able to track and follow him very well, it's in this type of situation Moore is able to make a play on the receiver.
- GRADE: 7.4

Zone Coverage: When Moore can drop into his zone, he's at his best. Watching him in that situation, he rarely makes mistakes and when he does it's either tactical (choosing to leave his zone) or mental (The Ravens play from 2012 playoffs comes to mind), not from a lack of skill. Moore isn't perfect, but when watching him, whenever we noted him dropping into that deep zone over the middle, we knew he'd likely stop the play from breaking big. Moore's quick back step almost always puts him in a great position to move to the play, the moment a player enters his zone he's rapid in his response. He rarely loses sight of receivers who try and get behind him and has a good sense of the field when he sticks in his scheme. As we watched more and more games, we kept saying "Why'd you leave your zone!" because his only mistakes come from him either getting greedy and trying to jump a route elsewhere or when he bites on a twist in a play. He's just so good when he plays to his responsibility, I have no idea why he just doesn't stay put all game.
- GRADE: 8.3

Closing/Recovery: A very odd area to watch Moore, for some reason he lacks speed when he gets beat to play catchup and rarely puts the effort to get across the field when things break down on the other side. One of the founding keys of any free safety is the ability to close in on the play, you see it in most NFL free safeties, but Moore seems to either have lost his speed from earlier in his career or just the effort to try. You don't see him flying to the receiver or racing to catch up, he's regularly beat in foot races by older or supposedly slower teammates, the worst was when Mike Adams and Shaun Phillips both passed him while chasing down a receiver. Now I can't say if it's a lack of effort or he's just that slow, but it's a big issue.
- GRADE: 6.3

Run Support: Moore shows consistently, both for the bad and the good, he will commit to the run, and he is able to see the path the runner will take and lock on and usually get a hit in, complications tend to arise due to his smaller size and poor tackling form. Now many free safeties may be undersized in relation to their height, two of the top safeties in the NFL, Seattle's Earl Thomas and Buffalo's Jairus Byrd, are shorter than Moore but Moore weighs less than either and lacks the bulk to tackle with his shoulder instead of his arms, and against big runners, it shows. He also has a impulse to over commit and when facing a player with a quick cut or juke, he can't correct. But because he's able to move to the play rather early, it's not as damaging as his poor tackling in coverage, especially since he isn't going to shy away from contact, a benefit despite his weaknesses.
- GRADE: 7.0

Tackling: As mentioned in run support, Rahim Moore lacks good tackling form, preferring to lead with his shoulder into the opponents legs rather than wrapping up with his arms. This does lead to some explosive hits, but more often than not it sees him bouncing off big running backs and receivers or has them recovering after he hits their legs. But the way Moore compensates for this is with energy, not avoiding the tackle, and attacking the runner with his short area burst. It's rare to seem Moore make a tackle far away from his starting location, he rarely runs the full field, but if opponents run or pass to his side of the field or into his zone, he'll put everything he has into his tackles.
- GRADE: 7.1

This scouting exercise improved my view of Moore

Rahim Moore is not reliable in a lot of aspects of his game, especially in the mental aspect of the game as well as tackling basics, but he atones for this through other aspects, especially his ability to cover deep zones. He isn't a strong run defender due to his small build and poor tackling form, but he isn't afraid to shy away from contact, even though he isn't always successful. He isn't a high motor player, especially when the play is away from his side, often jogging to try and tackle the ball career more often than not to try and save plays. On quite a few plays others would come from behind him, pass him, and then make the tackle, CB Omar Bolden and S David Bruton did this on more than a few occasions.

Consequently, if the Broncos coaches can scheme to his strengths, drop him into a deep zone, as well as coach him up on not taking the initial bait on delayed plays like draw runs and play action, there is hope for him. He has shown skill; I came into this not a Rahim Moore fan, and while I still think he has major flaws in his game, I will say this scouting exercise improved my view of him. Moore has potential.

But there is still work to be done.

Be the Broncos 2014 General Manager: Safety