Broncos Six-Pack: Broncos can find a wide receiver in 2014 draft

Share All sharing options for: Broncos Six-Pack: Broncos can find a wide receiver in 2014 draft

To be clear, Sunday's combine day wasn't just about the wide receivers. Running backs and quarterbacks completed their workouts; defensive linemen and linebackers hit the bench press as well.

But the wide receivers stood out as the deepest and most interesting group of the combine, led by Sammy Watkins and complemented by the likes of Mike Evans, Jeff Janis, and Martavis Bryant. At least 12 members of this crop of wide receivers ran 40-times hand-clocked in the 4.3-second range. The Chiefs and Chargers could be excited about this WR group too.

DenverBroncos.com continues to kill it with this combine coverage:

Quarterbacks worked out Sunday, with Broncos QB coach Greg Knapp in attendance - in fact, he was one of the assistant coaches actually running the combine drills for quarterback prospects. While it's clear John Elway is a bit old-school and prototypical when scouting an NFL quarterback (his height and arm mean a lot more than his 40-time), there are still a number of mid-to-late round QBs that could draw the Broncos' interest in May.

"You have to have that ability, first, and then hopefully we can get it out of you," Elway said of quarterbacks.

SB Nation's Dan Kadar is at the combine but still found time to post his latest mock draft. That's impressive.

His player for the Broncos hasn't changed - three weeks ago, he had Denver taking Ohio St. linebacker Ryan Shazier, and during the combine he still has the same.

31. Denver Broncos - Ryan Shazier, OLB, Ohio State - Linebacker Wesley Woodyard could land a big paycheck in free agency. If he leaves, a player like Shazier could easily fill the hole and play just as well.

Meanwhile, our friend Sayre Bedinger has the Broncos taking CB Kyle Fuller in the first round in his Broncos-centric mock draft. We scouted Fuller here.

Speaking of outside linebackers...

Will the real Von Miller please stand up?

In need of a defensive differencemaker, the Broncos are in pursuit of arguably the most talented pass rusher in the NFL: Von Miller, circa 2012.

"I think he’s grown up a lot, I think it affected him during the year, it had to, everything that went on with him,’’ Elway said at the league’s scouting combine. "He’s done a tremendous job of doing the right things, and everything he’s supposed to be doing. Hopefully he can continue doing that and Von can be back to the Von we know he can be.’’

My take: Von Miller hasn't shown me anything yet. The long, boring offseason is when Miller needs to put in the work and prove his maturity. If he's grown up, he can show me in August by coming into camp in shape (that is, 2012 shape) and without a blemish on his criminal record. 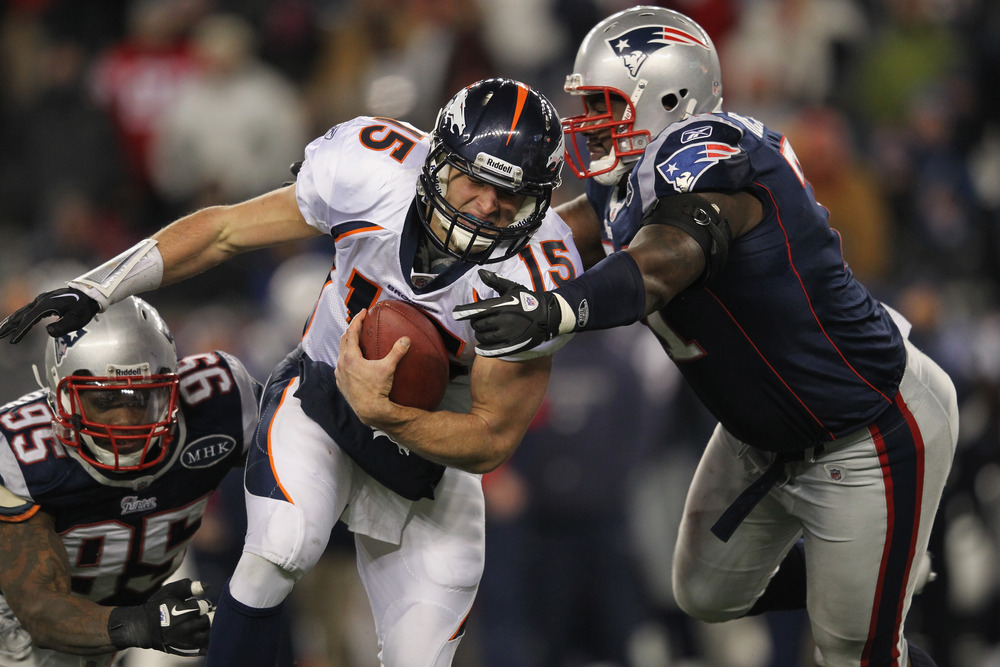 Could Tebowmania really return to Denver?

According to the Denver Post, the A11FL Spring League is looking to bring a franchise to Denver. Furthermore, they want to lure Tim Tebow to play QB for said Denver Gold by offering him a part of ownership.

"We're not making mistakes other leagues did. We always will be a spring league," A11FL commissioner Scott McKibben said. "We're an aspiration league. There are hundreds of quality players who aspire to play in the NFL, and we'll provide them with a chance to prove themselves. We'll be playing in major population and media markets in NFL stadiums, and we have the No. 1 sports network partner in ESPN."

I'm not sure the All-11 Football League can offer anything to Tebow that interests him; he's turned down many similar offers in the past. So I don't expect to see Tebow quarterbacking a Denver team any time soon, but it's something to keep an eye on, certainly.

Horse Tracks - Around the NFL

Editor's note: This move would give the Seahawks more room to potentially re-sign Michael Bennett, who is #1 on my free agent wish list. Say it ain't so, Seattle.

No franchise tags yet | ProFootballTalk
The two-week window for applying the franchise tag reaches the midpoint on Monday.  To date, no team has used it this year. It's no surprise.  There's plenty of time to use the tag, and the contours of the coming free-agency market don't begin to become clear until several rounds of Tampering...

What we learned: Takeaways from Sunday at NFL combine - NFL.com
Dee Ford got a little creative in describing why he believes he's the best DL prospect in the draft. We learned he is not lacking in confidence, among other things, at the scouting combine Sunday.