There are free agent safeties aplenty coming in March, but how many will be worth more than what Denver currently has on the roster?

Only ten days need to fall off the desktop calendar before teams can start negotiating with soon-to-be unrestricted free agents. Then - three days later, on March 11th - all fans can eat a smörgåsbord of talent that will propel their team to a win next February in Arizona. (As always, feel free to check out all of the 2014 NFL key offseason dates including when mini camps can start, the owners meeting and much more.)

The Denver Broncos are currently a bit of a mess at safety, in my opinion, with Rahim Moore coming off injury and Mike Adams slated to become an unrestricted free agent . Behind those two were the parvenu Duke Ihenacho and John Elway's championed Omar Bolden. Of course there is also Quinton Carter who has spent the last two seasons on injured reserve 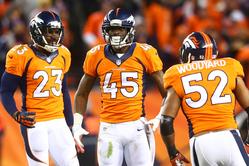 If you ask me my opinion (which you haven't) I think that the one position that Denver absolutely must upgrade is safety. However, as of right now it looks like the main players of interest will be re-signed by their current teams. Guys like Jairus Byrd, Donte Whitner and T.J. Ward are not likely to be available to the open market on March 11th.

Keep in mind before considering anything that the Broncos may very well be planning on putting Champ Bailey at safety and the likelihood of Denver targeting anyone high priced or otherwise becomes very small.

The Broncos have already spoke with Delmas's agent and the early interest in a top five free agent shows me that those in charge in Denver agree with my thinking that upgrading safety is important.

The Broncos are interested in speaking with free agent Louis Delmas, according to a report.

A Pro Bowl alternative in 2010 and 2011 Delmas started all 16 games in 2013, but had one of his worst seasons statistically in the tackle column as a professional. He is a high character guy, which aside from talent is probably the main draw for the Broncos.

Three words: degenerative knee condition. So bad that he was limited to just one practice per week during the 2013 season. The upside? He played nearly 100% of Detroit's defensive snaps.

Clemons was a free agent last season as well, the market wasn't there for him though and he returned to Miami on a one-year deal. The Dolphins aren't likely to bring him back this season it seems according to ESPN.com.

He signed a prove it deal, then he did, now he is a free agent. Clemons is good in run support and great in pass support. Since becoming a starter in 2012 he has gotten better every year with tackles being his specialty.

He is expendable in Miami because they are looking to get stronger, I guess the unspoken saying from that statement is that the Dolphins have found his ceiling.

ProFootballFocus made Clemons their fourth best overall free agent safety, being that their top three aren't likely to be available Clemons could become a hot commodity quickly.

Tennessee Titans seem to be gearing to allow their secondary to be looted this offseason, though Jim Wyatt reports that the Titans would like to get Pollard back for next season.

He hits hard as Eric Decker can attest, this one was even legal. Pollard is perhaps best remembered around these parts as a member of the Kansas City Chiefs, but he has played for the Houston Texans, he was on the Baltimore Ravens super bowl team and spent last season with the Titans.

Also, if you haven't heard about The Pollard Connection, you should Google it. This man for whatever reason is a one man Patriot killer.

If he leaves the Titans he will be joining his sixth team in nine years. Last season he allowed a QB rating of 100.1 in passes thrown his direction and only managed to defense four of them.

Should the Broncos bring back their main starting strong safety over the past two seasons? After losing his starting job to Duke Ihenacho, Adams seemed to gain it back. He's not a playmaker at SS, but he's a veteran presence who adds some value to a Broncos team lacking depth.

(as ranked by rotoworld)

Be the Broncos 2014 General Manager: Safety